McLaren is considering running with a more extreme Monza-style set-up on its car at the Russian Grand Prix in a bid to help boost its straightline speed performance. 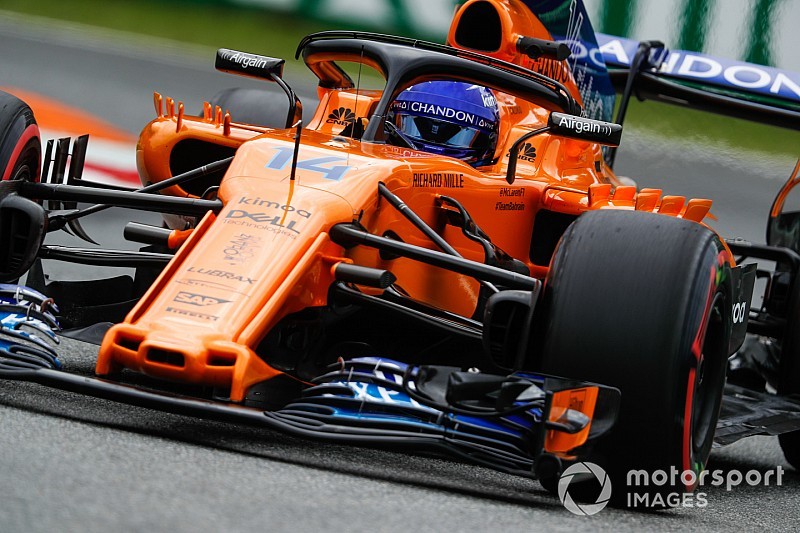 The team’s progress this year has been dented by a car that has more drag than its rivals, plus it has not been helped out by a gear ratio choice that is not ideal for long straights.

While the gear ratio issue cannot be sorted because teams are stuck with them for the season, McLaren still thinks it can boost its top speed through aerodynamic changes.

Following some encouraging results from a more aggressive set-up choice to reduce drag that was trialled in practice at the Italian Grand Prix, the team is ready to give it another run at Sochi.

Fernando Alonso said: “I think some of the ideas we tested in Monza where we improved on the Saturday were more for drag reduction, so will be implemented. Hopefully Russia will be the first opportunity to revisit those set-ups.”

Sporting director Gil de Ferran suggests a final decision on its plans for Russia have not been sorted, but says the success of the new setup in Italy means it likely it will be used

“I won’t get into details obviously,” said de Ferran when asked by Motorsport.com about the plans. “We always try to do the best we can and step forward.

“We’re trying to bring a little bit of aero developments every race but that’s not the only thing: we’re exploring different spaces.

“Like Fernando said, in Monza we decided to take a completely different direction and it worked well for that type of track, and maybe we’ll explore a similar direction again in Russia.”

He added: “The work hasn’t stopped. We’re full-on on next year’s car but we come into every weekend trying to do a little bit better, fight for points, and improve our position in the championship.”

Alonso is currently eighth in the drivers’ championship standings after his seventh-place finish in the Singapore Grand Prix.