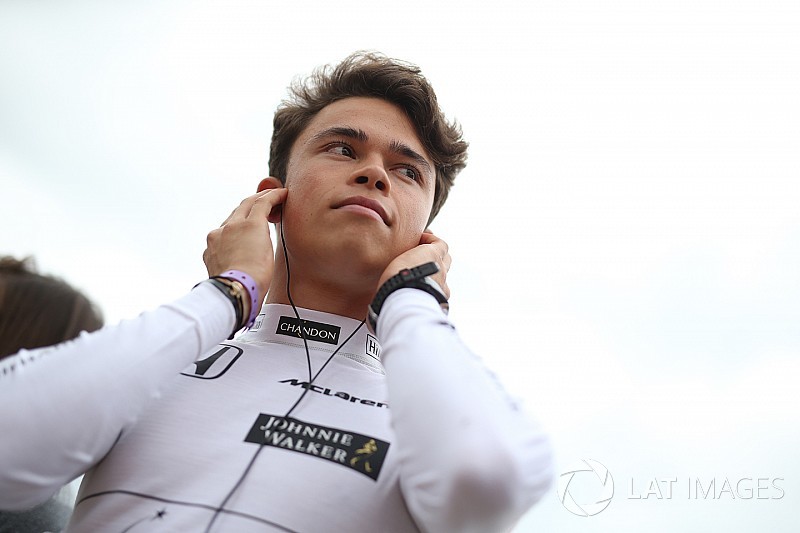 McLaren junior Nyck de Vries says he's “not at all” concerned about not having a drive for the upcoming post-Hungarian GP Formula 1 test.

The Dutchman, who has been part of the McLaren set-up since 2010 and is currently racing for Rapax in F1's main feeder series Formula 2, will be present at the test but will not be driving.

He will thus be the only McLaren junior to miss out on any F1 tracktime in Hungary, with fellow F2 driver Nobuharu Matsushita getting a run at Sauber and F3 prodigy Lando Norris joining Stoffel Vandoorne in driving the Woking team's MCL32 challenger.

Asked whether missing out on a Hungary test opportunity was a worry, de Vries told Motorsport.com: “Not at all. Not at all. It doesn't mean anything to me.

“I think for me the priority is supposed to be, first of all, to do well in Formula 2. Let's see what happens next year and where I will be, but if I would be in Formula 2, then obviously I would have to win it to make a chance [in F1].

“I think that's the only way to put yourself in a position to earn a chance.”

De Vries appeared on the verge of quitting the junior single-seater ladder last year, amid tests with Ferrari's GT team and the Audi DTM outfit, but the 22-year-old Dutchman eventually found an opportunity in F2.

A rookie in the series' Dallara GP2/11 machine, he is currently 10th in the standings, with a victory in Monaco to his name.

Asked whether his chances of making F1 felt more real now than they had back in 2016, de Vries said: “You know, in this world things change so quickly... I don't know.

“I mean, I'm not even looking that far ahead, I don't think it makes much sense, because things change quickly and you're only as good as your last race.

“My path has already changed many times in different directions than I was planning to or expecting to, so it doesn't make sense to look that far ahead at the moment.”

While restating his belief that he “without doubt” needed to become F2 champion to step up to grand prix racing, de Vries said he was frustrated by the likelihood that opportunities for younger drivers will be scarce in F1 in 2018.

“Formula 1 in general should try and give young drivers a bit more chances, because I think they are proving they are not less performant than drivers who have been there for many years," he said.

“It looked like next year could become an interesting season with many seat changes, but at the moment it looks like nothing will really change.

"I mean, there might be a few swaps but not as much as everyone was hoping and expecting.”

Kubica not in frame for 2017 race chance, insists Renault