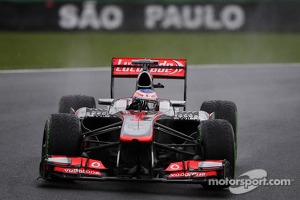 “Fortunately, we got a lot of miles under our belts in this morning’s session – we felt the conditions were consistent enough for us to conduct some running on the Intermediate tyre. We did a longer run on high fuel, and also did a single-lap run on lower fuel – on each occasion, the car seemed okay.

“The afternoon session was more about waiting for the weather to settle down enough for us to continue running on Inters. That would enable us to back-to-back our morning run in order to measure the changes we’d made between sessions. We got some useful information.

“In these conditions, it would’ve been nice to have more tyres to play with – the wet weather presents more of an opportunity for us, but it’s also more of a risk, so we’ll see how the rest of the weekend pans out. Typically, the forecast suggests that it will be unpredictable for the remainder of the weekend.”

“I’m not perfectly happy with the set-up – but, at least by doing some running, we have an understanding of what we can change for tomorrow. If the conditions stay the same for tomorrow, I think we’ll take a step forward.

“If the weather stays dry, we know where we’ll probably end up; but if it’s wet, we could have a stronger race. Our current forecast says it’ll be wet for qualifying, and that it’s 50:50 for the race.

“But you just never know in São Paulo…”

Martin Whitmarsh Team principal, Vodafone McLaren Mercedes: “You can take nothing for granted at Interlagos and this place once again showed its capricious side by hurling the elements at us during both of today’s free practice sessions. It’s something we’ve come to expect – and even enjoy – from such a mighty racetrack.

“As such, while we were able to complete a useful number of laps – particularly during the lighter rain that fell this morning – we still don’t have a conclusive read on pace and performance ahead of Sunday’s race.

“Still, I’m sure our engineers were kept busy collecting data during both sessions, and we’ll put that information to good use tonight as we leave no stone unturned in our efforts to refine our cars’ set-up for qualifying tomorrow.”