McLaren Honda: Race and accident report from the Australian GP 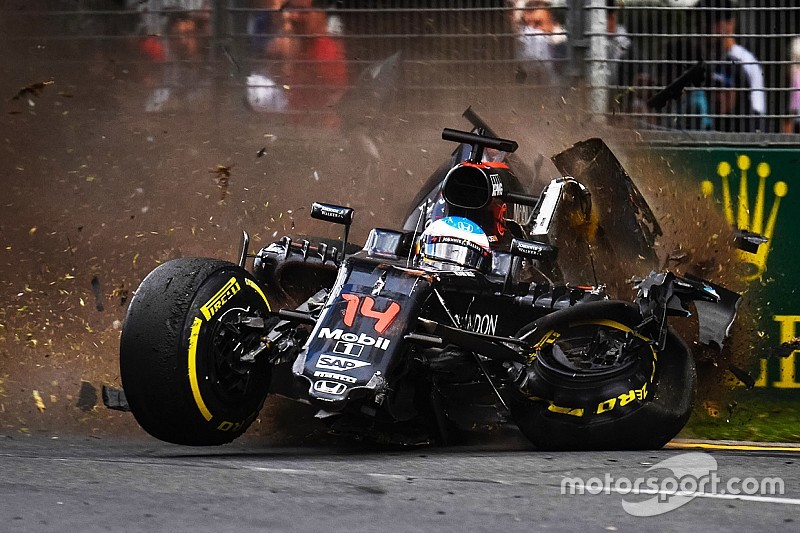 Fernando Alonso: “I got out quickly so my mum could see I was okay!”

Today’s race was overshadowed by Fernando’s accident with Esteban Gutierrez at Turn Three on lap 16.

Despite the violence of the crash, Fernando was able to extricate himself from the car unaided, and was then taken to the circuit medical centre for routine checks, before being declared okay by the doctors. His car fared less well – both the chassis and the power unit were heavily damaged, and the resulting debris was scattered so extensively that it prompted a red-flag stoppage to clear up the mess.

After the restart Jenson adopted a different strategy to the majority of runners, but failed to capitalise on it, finishing 14th.

Nonetheless, there were positives to take from the weekend – our competitive package looks healthy, and both drivers ran strongly on the fringes of the top 10 before the red flag.

We will head to Bahrain optimistic of maintaining that strong momentum.

“I’m thankful I’m alive and that nothing serious happened – it was a big shunt.

“A combination of factors caused Esteban [Gutierrez] and me to end up crashing. I was in the car flying and bouncing around – I could see the sky, then the ground, then the sky again. Then, when the car landed, I saw a little gap and I got out quickly to make sure that my mum, who was watching the race on TV at home, could see that I was okay!

“It was a racing incident – I’m very happy we’re both fine, which is the most important thing.

“But, soon afterwards, my thoughts switched to frustration and disappointment, because we missed an opportunity to get some points in the first race of the season, and we probably lost a power unit too because the car is more or less completely destroyed.

“We risk our lives every time we get in a Formula 1 car: these things happen, but I’m extremely happy to be okay. The reason I’m still alive is probably thanks to all the fantastic work the FIA has done over the past 10 or 15 years to improve safety, work they continue to do. And I’m also grateful to everyone at McLaren, who built me such a strong and safe car.”

“I’m really glad Fernando was able to walk away from that accident – I’m sure he’ll remember that one for a few weeks.

“It’s amazing how far these cars can be catapulted when they touch tyres; under braking, it can all happen very quickly when it goes wrong. But the fact that his car survived shows how far the sport has come in terms of safety.

“My car wasn’t too bad, but I think we made some imperfect strategic calls this afternoon. Also, the red flag hurt us because we’d already made our first stop. Then, after the restart, we ran the Supersoft – which lasted about 10 laps – and then fitted the Back-Up, which everyone else had been on since the restart. Around here, you can catch up but you can’t easily overtake, so we ended up at the back of the queue after making our stop.”

“Before I say anything else, I want to praise two things: the structural integrity of modern-day Formula 1 cars, and the safety features of modern-day racetracks. Fernando’s shunt was a big one, and the fact that he was able to walk out of his car after such a heavy impact is impressive indeed.

“He visited the FIA medical centre immediately after the accident, and was formally okayed by the doctors there.

“He’d been driving extremely well at the time, and we believe he may well have scored points had his race run its normal course.

“Moving on to Jenson, ironically, it was the Safety Car and then the red flag triggered by Fernando’s accident that compromised his race strategy, preventing him from being able to drive for a points-scoring finish himself. Tyre degradation was also a problem for him this afternoon.

“However, all in all, despite the fact that we scored no points here in Melbourne today, we’re quietly encouraged by the progress we’ve made over the winter, and we firmly believe that, given a less confused qualifying session and an incident-free race, we’ll be in a position to score points in grands prix to come.”

“First of all, I am relieved that both Fernando and Esteban walked away uninjured from their accident.

“Our overall pace during the race was solid, but unfortunately Jenson lost out to the red flag caused by the crash. As the majority of drivers switched tyres during the track clean-up, sadly Jenson had already pitted four laps before. Unfortunately he struggled with his tyres throughout the race, and was unable to regain any of the positions.

“I am pleased that throughout this weekend’s practice sessions and qualifying, we were able to see the improvement of the whole package. However, it was a disappointing to not be able to prove our progress through race results.”

A disappointing season opener for the Sauber F1 Team