McLaren 'in good shape' despite no title sponsor

Jan.22 (GMM) McLaren has confirmed it will not announce a replacement for departed title sponsor Vodafone when the 2014 car is officially launched on Friday.

But after the final season of Vodafone's backing passed without a win or even a podium for the great British team, managing director Jonathan Neale insisted McLaren remains in good financial health for 2014.

"We're in good shape financially," he told GMM exclusively, "and we have a lot of fantastic partners -- Mobil 1, Santander, GSK, Johnnie Walker, Hilton, Hugo Boss, Tag Heuer and SAP and quite a few more." 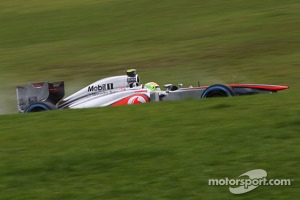 Neale pointed out that because McLaren is not a PLC, it does not have to "show a profit".

"Our shareholders, Ron Dennis, Tag and Mumtalakat, never take a dividend," said Neale. "No, they're motivated by the desire to see McLaren grow and grow again.

"So, yes, I can confirm that McLaren will have a bigger operational budget in 2014 than we've had in any previous year," he added.

However, McLaren is in a period of great change, and not just because Honda is arriving as the works engine partner in 2015.

McLaren supremo Dennis is also back in charge, amid speculation Martin Whitmarsh's days as team principal are over.

Claiming that Ross Brawn or Sam Michael could be set to take the reins, Speed Week reports that Whitmarsh will not be at the Jerez test next week.

And Britain's Daily Mail newspaper reports that Ciaron Pilbeam, once Mark Webber's race engineer at Red Bull, has been poached by McLaren from Lotus to be chief race engineer "in the wake of their disastrous 2013 campaign".

Hulkenberg hopes 2014 cars not too slow