McLaren is ready for Indian GP


“This is such a great racetrack – it’s fast, flowing and challenging. It’s pretty technical too, which is quite unusual for a fast circuit, but the flow from one corner to the next means that positioning the car is quite critical if you don’t want to fall out of the rhythm and lose time. Track positioning is also important because several areas of the circuit are extremely wide, and narrow down from corner-entry to exit.

“The long back straight will once again make it important to balance the car’s gearing and downforce for maximum speed with DRS. That straight, and the braking zone into Turn Four, are probably the most straightforward places on the circuit upon which to overtake. In fact, the rest of the circuit is quite fast, with only a single racing line, so trying to get past during the rest of the lap is pretty tricky. 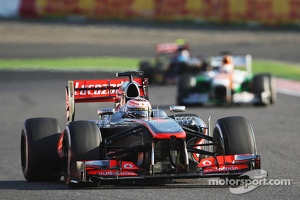 “The last few races have shown that, realistically, we’ll once again be fighting for the minor points. Still, I enjoyed my races in Korea and particularly Japan – where it was both satisfying and unusual to be armed with fresh tyres and able to pick off cars on older rubber, as opposed to the other way round – so I’ll be looking to take the fight to some of the faster cars once again next weekend.”


“I love travelling to India – it’s such a rich and vibrant country, and always an eye-opening place for any visitor.

“The Indian Grand Prix has been an interesting and exciting event for the past two years – I really think it’s starting to make its mark on the country. It’s well attended, and the crowds seem interested, enthusiastic and passionate – that’s always great to see.

“After two tricky races in Korea and Japan, in which I had good pace but just seemed to suffer a whole range of misfortune, I’ll be hoping for a smoother ride in the next flyaway double-header. It’s been frustrating to see decent results slip away from me, but I’m confident that we’ll be able to turn things around quickly.

“With the race skipping a year for 2014, I hope we can help make this year’s event particularly memorable. We know we don’t have the machinery to fight the top four teams, but there’s always fierce competition around the fringes of the top 10; scrapping for points might not be what Vodafone McLaren Mercedes is all about, but it’s nonetheless satisfying to nail the set-up and the strategy and drive a perfect race.

“That’ll be my aim again this weekend.”

Martin Whitmarsh
Team principal, Vodafone McLaren Mercedes
“There is little rest for our personnel as we quickly turn ourselves around from a fortnight in the Far East and prepare for this weekend’s Indian Grand Prix. While we didn’t possess the machinery to enable us to fight the top four teams at either of the last two events, I think we can be pleased from an operational standpoint – despite issues that affected both drivers in Japan and Korea – most notably a broken front wing and two punctures – we were strategically efficient, and were able to deliver some consistent finishes for both Jenson and Checo.

“Equally, I must also single-out praise for both drivers: it’s been a difficult season, but they have each remained calm, measured and dedicated – they have been a motivational force for the entire organisation, and I am very proud of the way they’ve responded.

“The Indian Grand Prix has quickly developed into an important Formula 1 event – it’s popular and well attended, and the next few years will be critical if the sport is to establish a foothold in such a vast territory. It’s been pleasing to see the enthusiasm that Indian fans have for our sport – and our love for their country is equally reciprocated – and I would love to see the race grow in significance over the coming years.”