Sergio Perez: “I’ll be really hoping to put on a great show for all my Mexican fans” 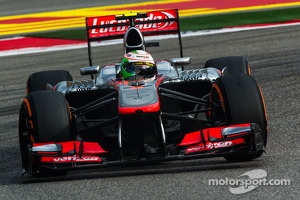 In that respect, I’m slightly disappointed – but if you’d told me I’d be seventh before the start of qualifying, I’d have taken it.

“For quali, I was just able to relax and focus. At the end of the day, I’m a racing driver – I’ve been doing this my whole life. When I get in the car, I just forget about everything else and concentrate on my own performance.

“Tomorrow, I’ll be racing in front of my own people – that makes me feel hugely proud. I’ll be starting from the clean side of the grid, I’ll be hoping for a good start, and I’ll be really hoping to put on a great show for all my Mexican fans.”

“That’s tough, especially when we’ve looked pretty quick for most of the weekend. But I don’t know where our pace has gone in qualifying – it’s not the first time it’s happened.

“It wasn’t necessarily the weather conditions – other drivers seemed to cope – although I guess it may have contributed. We’ll investigate. It was weird though – especially when you saw that Valtteri [Bottas] could go quickest in Q1 but his team-mate couldn’t even get through to Q2.

(*) Jenson will start 16th owing to a three-place grid penalty.

Martin Whitmarsh, Team principal, Vodafone McLaren Mercedes: “Checo did a great job to end up P7 in qualifying here in Austin today, and I’m sure he’ll be keen to convert his good quali form into a fine race result tomorrow.

“Jenson struggled a little with the balance of his car, and undoubtedly the very windy conditions didn’t help.

“Nonetheless, despite his three-place grid penalty, tomorrow he’ll be determined to force his way through the field from his lowly grid position, as we’ve so often seen him do to great effect in the past.

“Last but far from least, I hope that we at Vodafone McLaren Mercedes will be able to do our bit to make the 2013 United States Grand Prix a fabulous event. Formula 1 may not yet be as big in the United States as it is in some other countries, but undoubtedly the fans here in Austin are enthusiastic and knowledgeable, and the superb organisation we see here at the Circuit of the Americas is an excellent conduit to their entertainment and enjoyment.”