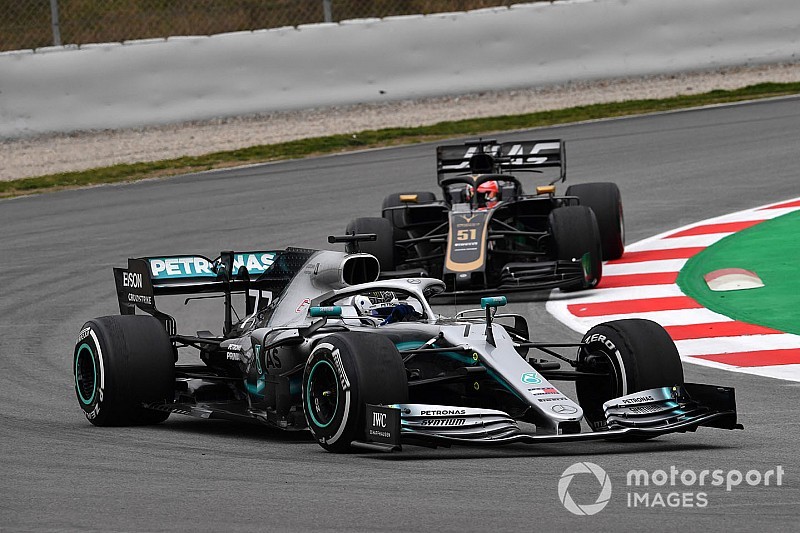 Valtteri Bottas says Mercedes needs an upgrade to completely solve the handling issues that dogged the first run of its new 2019 Formula 1 challenger at Barcelona in Spain this week.

While Ferrari hit the ground running and enjoyed a strong first week of pre-season testing, Mercedes had a more low-key start that left it in no doubt it is currently on the back foot.

Speaking at an event with Mercedes title sponsor Petronas in Italy on Friday, Bottas revealed that the main issue for the team was finding a consistent balance for the car over a whole lap – with the W10 having ‘massive’ issues in some corners.

“We have work to do, but it’s a good feeling in the sense that it feels like there is potential,” Bottas told selected media, including Motorsport.com. “We do need to make improvements.

“We were getting to a much better state at the end of the week, but some of the handling issues can only be sorted with some upgrades. We’re hoping to fix those hopefully soon.”

World champion Lewis Hamilton said he had not wasted too much time worrying about what other teams had done, but was in no doubts about the scale of the fight Mercedes faced.

“At the moment we are behind,” he said. “So, we don’t approach the first race currently at all relaxed, not that we ever do. We still have a lot of work to do.”

He added: “This is going to be the hardest year yet, but I feel I have the best group of people behind to climb that mountain together. We are going to face our toughest challenge but I feel like I have the right soldiers behind me.”

Asked what was missing from the car, Hamilton said: “I won’t say! I don’t want the others to know what we do and don’t need.”

Mercedes boss Toto Wolff had no doubts that Ferrari was ahead, and reckoned that the Italian team still had plenty of performance in its pocket.

“I think in Barcelona [test] one what we have seen is that Ferrari is ahead of the pack,” he said. “The car looks fast and is fast on lap times.

“I think that yesterday they could probably have gone 1.5 seconds faster if they wanted to, and that is the fastest car we have seen in testing so far. Then it is pretty much everybody bunched up, which is pretty exciting between all the other teams.

“Now it is about seeing what happens in Barcelona [test] two. I have a feeling everybody will bring stuff to the car and then again in Melbourne. So probably only then will you be able to judge the competitive balance and not before.”

Testing verdict: Who’s winning the winter war and why