Despite an up-and-down Jerez debut for the new Brackley-built W04, Lauda sounded optimistic about the future.

Feb.9 (GMM) Sebastian Vettel is the best, but Mercedes can be a top-three contender in 2013.

That is the claim of Niki Lauda, the triple world champion who is also the straight-talking expert pundit for German television RTL.

But he is also now Mercedes' 10 per cent shareholder and board chairman, and despite an up-and-down Jerez debut for the new Brackley-built W04, Lauda sounded optimistic about the future.

"My big joy is that the Mercedes can now compete with the top three teams," he told Bild newspaper. 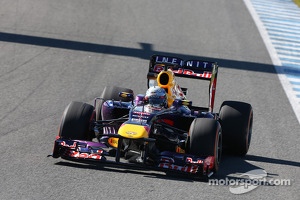 But Lauda acknowledged that world champion Vettel, who drives for Red Bull, is still in front.

Asked to assess the opening four test days of the 2013 pre-season, he said: "The cars are relatively close together.

"In my judgement Vettel is the fastest at the moment. The car works well; looks reliable, and right now he is a bit faster than the rest."

Meanwhile, Lauda dismissed the plight of F1's struggling smallest teams, who are complaining that the financial situation is putting their survival at risk.

"Anyone who comes into Formula One - the highest class - chooses to," said the outspoken Austrian.

"So I have no pity when a team gets into financial problems. I don't know what everyone's getting excited about.

"The Spanish team (HRT) just did everything wrong they could do wrong. They were poorly organised and had a bad car.

"It's right that if you do a good job, you earn more money. Simple as that.

"Now and again, over the past 30 or 40 years, Formula One has had financial problems, and just like before it will settle down again," added Lauda.

The curious case of the F1 pay driver