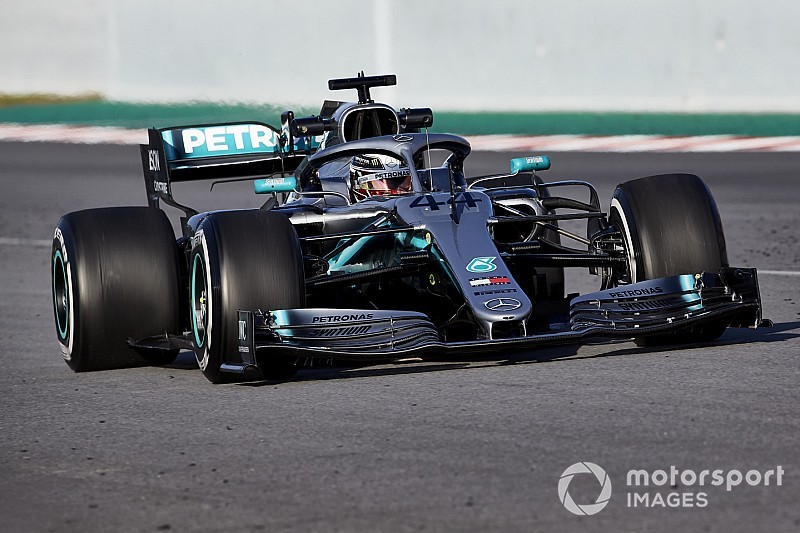 Mercedes' efforts in the design of its 2019 Formula 1 car have made sources of "pride" with its previous design "start to look clumsy and naive by comparison".

In a video that compares Mercedes' new challenger, the W10, with its double title-winning predecessor, technical director James Allison talks through the major changes triggered by F1's new aerodynamic regulations for 2019.

Simpler front wings, brake ducts and bargeboards have been introduced to make it easier for cars to follow one another, which Allison said had prompted a "breathless time in the wind tunnel" so Mercedes could find "subtler, more clever ways" of managing front tyre wake.

However, he also explained how Mercedes has made progress with other key areas of the car independent of the rule changes, pushing "every teeny, tiny part of the car" to "the limit that we think we can get away with".

Allison said: "It's an interesting thing that things we thought last year were a source of great pride to us that we thought we had pushed to the very limit, start to look clumsy and naive by comparison.

"Take last year's sidepods as an example, they were something we made quite a big fuss about because they were tighter than we'd ever managed to make them in any previous year.

"But look at these sidepods [on the 2019 car], look at this bodywork, and it is just vacuum-wrapped to the car in a way that we just wouldn't have thought possible 12 months earlier.

"Similarly on the front suspension, we've been able to lift them further.

"The same is true everywhere, if you were to take the skin off this car and look underneath it you'd find that in every part of the car it's been just pushed a tighter, made a bit stiffer, made a bit lighter and just bought more performance."

F1's rule changes were not designed to make the cars slower but they did mean teams had to find ways to claw back aerodynamic performance.

Simpler, wider front wings, smaller bargeboard arrangements and fewer flicks and turning vanes on the brake ducts are all now features of the 2019 cars.

Allison said creativity had been essential to try to continue an "underlying aerodynamic theme" of managing front-tyre wake that has been prevalent since 2009.

"These tyres create a lot of aerodynamic chaos behind them," said Allison. "They generate a nasty wake of low-energy, chaotic air.

"If you allow that air to fall on your own car then it damages that car's ability to generate its own downforce.

"Every year since 2009 we've been developing techniques to take the wake of this tyre and throw it away from the car as far as we possibly can.

"The main agents have been the front wing, the brake ducts and the bargeboards behind, all of which have been snowploughing air outboard, away from the car."