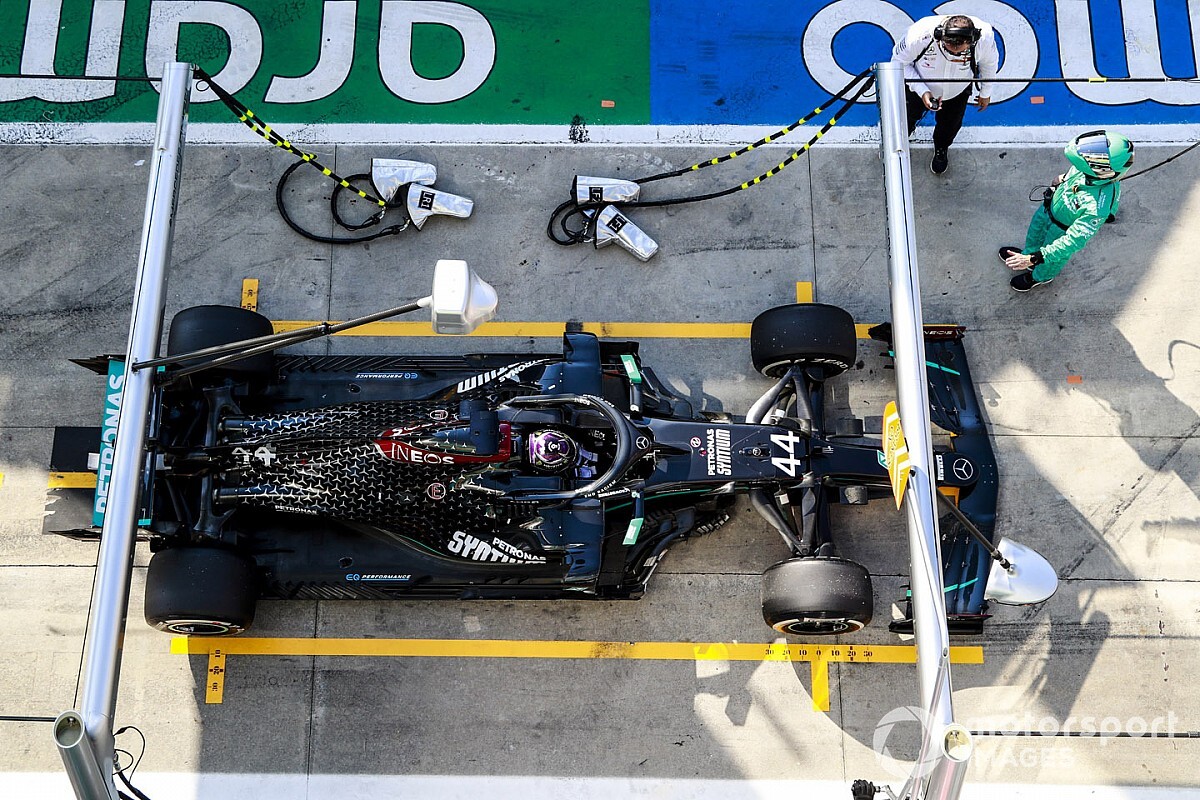 Mercedes has explained the error which "screwed” Lewis Hamilton’s Italian Grand Prix after receiving a stop/go penalty for entering the pit lane while it was closed.

Hamilton sat over 10 seconds clear of Formula 1 field at Monza when the safety car was deployed when Haas driver Kevin Magnussen parked up at the side of the track near the pit entry.

It prompted race control to deploy the safety car and then close the pit lane 11 seconds later, preventing drivers from coming in so that Magnussen’s car could be wheeled to safety.

But Hamilton came into the pits after missing the signal boards saying the pitlane had been closed, leading to an investigation from the stewards.

Hamilton was handed a 10-second stop/go penalty, leaving him more than 25 seconds off the back of the field after he came in one lap after the race restarted following a red flag.

Hamilton was able to claw his way back to seventh place, picking up a bonus point for the fastest lap in the process.

Mercedes F1 chief Toto Wolff explained that the team was unable to see the boards denoting that the pitlane was closed from the pit wall, and that there was no red light at the pit entry.

"It was a weird sequence of events that maybe we could have spotted earlier," Wolff said.

"The decisions that were taken were highly unusual, but they were absolutely within the rules.

"One of the Haas [cars] was parked to the right, near the entry, on the inside of Parabolica, and there was a single yellow. Eleven seconds later, a safety car was deployed.

"Once the safety car was deployed, they put the entry to the pit lane on red, but it wasn't exactly red, it was two yellow crosses on the outside.

"One of the strategists just shouted into the radio whilst we were entering the pit lane. There was confusion.

"We can't see the signs, and this is just a sequence of events that screwed Lewis's race. Not happy, but you have to take it on the chin."

Hamilton revealed after the race that he had failed to spot the yellow crosses on the boards saying the pitlane was closed, accepting the blame for the error.

"Honestly I didn't see those boards, so I take responsibility for that," Hamilton said.

"[It is] something I will learn from. To get seventh and still get the fastest lap, that's still some good points considering I definitely didn't think that was possible from 26 seconds behind the last car.

"I'll definitely take it, and grateful obviously Max [Verstappen] didn't score any points. So not a huge loss today."

Wolff said the only way Mercedes could have spotted that the pitlane was shut was by looking at the fourth page of the FIA's timing information.

"From the pit wall, you can't see these yellow crosses, and if the driver doesn't spot them, which I believe is absolutely the truth, the only way you can see that the pitlane was closed was on page four of the FIA communications system," Wolff said.

"Nobody looks at that page when the safety car is deployed, the driver is about to come into the pits. Everything is concentrated around the pit stop.

"Unlucky, I would say, and a very unusual decision to close the pitlane."

Hamilton reveals why he visited F1 stewards during red flag