Aug.14 (GMM) Mercedes is considering a partial withdrawal from Formula One at the end of 2013, the French weekly Auto Hebdo is reporting.

The Stuttgart car maker, still yet to agree a new Concorde Agreement deal with Bernie Ecclestone, reportedly could then field only a 'semi-official' team from 2014. 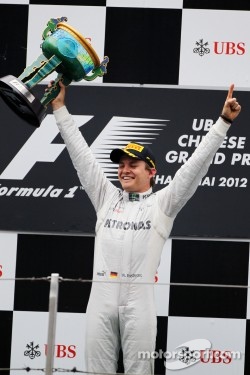 Nico Rosberg at his podium in Shanghai.

Mercedes would however continue to supply customer engines, as it does currently to McLaren and Force India, whilst its 'semi-official' works team might be known as 'AMG F1', Auto Hebdo said.

The magazine speculated that Brackley based AMG F1, currently known as Mercedes AMG, would continue to be run by team boss Ross Brawn, with Michael Schumacher in the cockpit.

But Mercedes would focus more strongly on engineering than team ownership and management, Auto Hebdo said.

It is likely F1's only engine suppliers in 2014 will be Mercedes, Renault and Ferrari, meaning they all could take on more customers for the new V6 rules.

Reasons cited for Mercedes' rumoured change of direction are the Gerhard Gribkowsky corruption scandal involving F1's chief executive Ecclestone, and the latter's push for Mercedes to make a long-term pledge to the sport.

Another reason mentioned is Mercedes' lack of success with its full works team since 2010, despite Nico Rosberg's breakthrough win from pole in Shanghai this year.