Mercedes has revealed the layout and function of the complex steering wheel design it will use in the 2019 Formula 1 season.

Including the usual clutch and gear shift paddles, Mercedes' 2019 steering wheel has 25 buttons, switches and controls.

These are split further between thumb-wheel switches, rotary switches and small aeroplane-grade buttons, which require a strong push to be activated to minimise the risk of one being pushed by mistake.

Three rotary switches adorn the lower part of the wheel, controlling elements like the strat modes that deal with various power settings, various car parameters such as screen brightness and engine settings like those for the MGU-K. 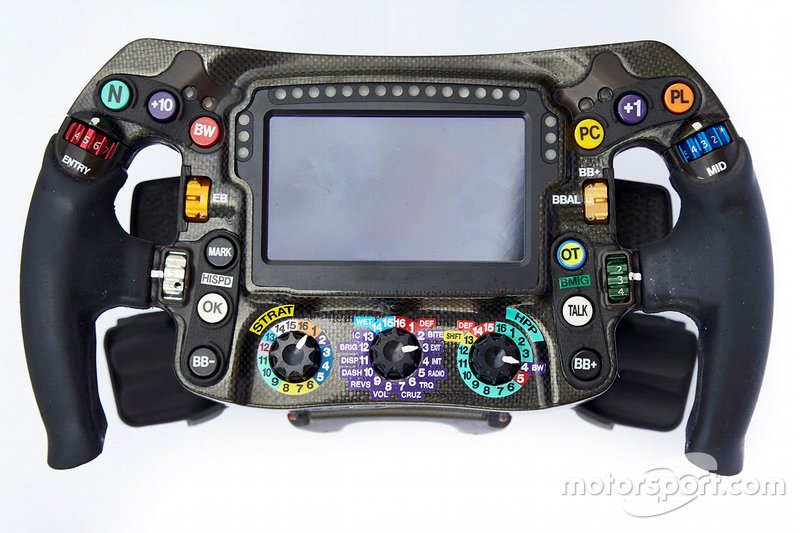 Three thumb-wheel switches – two of which are located on the left-hand side of the wheel and one that is on the right – control the corner entry, apex and exit settings for the differential, to tailor torque transfer to each of the rear wheels.

The other two are related to modifying the effect of engine braking (to the left of the centre display) and adjusting the brake balance (to the right of the display).

The brake balance switch works in tandem with two buttons either side of the base of the wheel: the buttons are used for "fine tuning", while the switches alter the baseline map.

Mercedes' remaining buttons control everything from activating DRS, the pitlane speed limiter or the engine's 'maximum power' start mode, to selecting neutral (rather than letting the driver do so via the paddles) or letting the driver use the radio.

Lewis Hamilton and Valtteri Bottas will use "three or four" wheels over the year, with each one taking 80 hours to make.

Mercedes' ultra-complex wheel is mostly built at its Brackley factory and is mainly made of carbonfibre, fiberglass, silicon, titanium and copper.

The central display and underlying circuit board are not built by Mercedes as they are common components.

Hamilton and Bottas are "quite heavily involved" in the design process of the steering wheels, which are tailored ergonomically to each driver.

Mercedes says: "Those changes are not just made at the beginning of the season. The steering wheel design is a continuous process.

"During the season, drivers might ask for changes to the grips and the layout of the buttons and switches, based on the individual demands of the driver and the track layout."

Ricciardo to be represented by Ronaldo’s agency

No point being fake for Netflix - Steiner