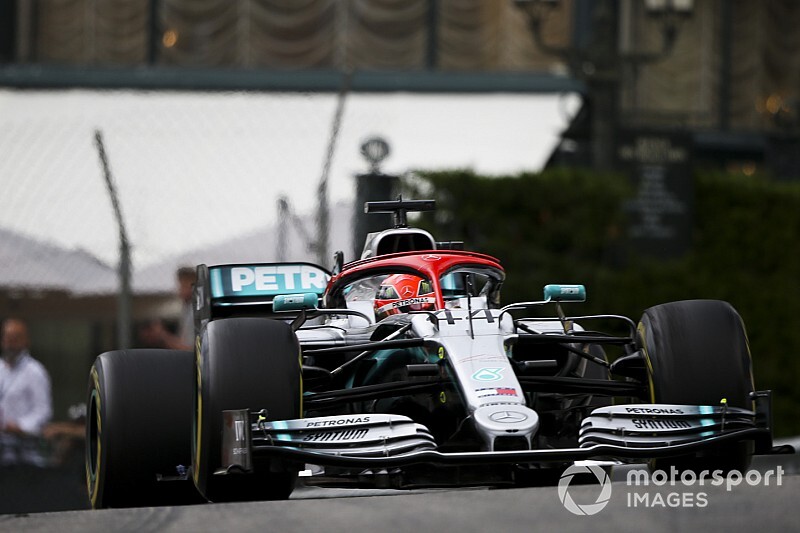 Mercedes says Lewis Hamilton "saved" the team at the Monaco Grand Prix after admitting it made a mistake in switching to mediums during the early safety car period.

The German car manufacturer went it alone in moving on to the medium compound during the early safety car that was called out to clear debris left on the track from Charles Leclerc's flailing tyre.

It decided against switching to hards as the pursuing Red Bull and Ferrari teams did because it was concerned that a slow warm-up could leave it vulnerable.

But with Hamilton suffering graining of his fronts a few laps into his stint, it meant the reigning world champion had to manage his pace a lot and back up the cars behind him in a bid to ensure he could make it to the finish.

Asked about the move to mediums, Mercedes boss Toto Wolff admitted Mercedes got it wrong but was clear how much Hamilton's driving had bailed the team out.

"I've just had a chat with [strategist] James [Vowles] and obviously it was the wrong call," said Wolff.

"We thought the tyre would make it to the end but it didn't. He saved us - his driving saved us. It's something which we really need to analyse."

When Mercedes made the switch, it felt that it would not be too hard to get to the finish, but the graining that soon emerged on Hamilton's front soon changed the mood in the pits.

"What was calculated was that the medium would make it, if we were to change on lap 15 or 16, with the right management," explained Wolff.

"So being in the lead that was a pretty straight strategy. It didn't even seem like a huge stretch, but we realised 20 laps into the race that on the left front some graining appeared and he started to complain about it, the understeer that resulted from the graining. It was clear that it would get very, very difficult to make it to the end.

"So we had quite some discussions about the tyre lasting another 40 laps, and I was reminded that it was only 20 laps of a normal circuit so calm down a bit!

"But everybody knew that it was going to be a huge stretch and even probably 20 laps from the end he had 0% rubber left on the tyre with massive understeer on the slow speed. You could see around Loews the car wouldn't turn any more."