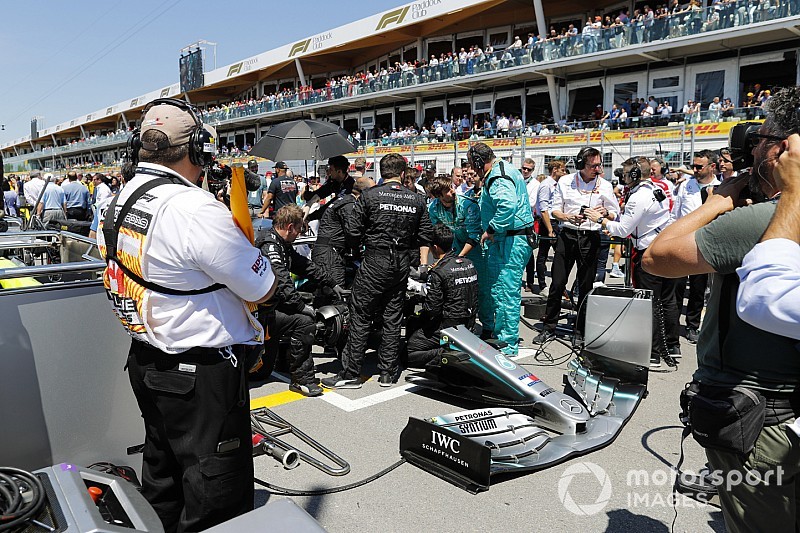 Mercedes did not know if Canadian Grand Prix winner Lewis Hamilton would even start the race because his Formula 1 car was in "a million bits" on Sunday morning.

Hamilton claimed his fifth victory in seven grands prix this season after a race-long battle with Sebastian Vettel, who won on the road but was dropped to second because of a time penalty for an incident with Hamilton.

"What looks to be a victory was a very tough weekend for the team behind the scenes," said Wolff. "We had a car that was in a million bits because of the hydraulic leak.

"We weren't sure whether we could race it, whether it would finish the race. Then half the team was suffering from a flu, which nobody sees. It was just a matter of pushing through.

"We had the engine that blew up on Lance [Stroll]'s car, which we didn't know if it would affect us. Overall it was one of the most difficult race weekends I can remember even though it didn't look like this from the outside at all."

Racing Point driver Stroll had a fiery exit from final practice, which worried Mercedes because his newly-introduced 'Phase 2' engine had failed.

Mercedes only rolled out its upgraded engine for its works cars and customer teams at this race, but Wolff had made it clear the team was not going to turn the engines down in the grand prix.

There were no subsequent engine issues for any Mercedes-powered cars, although the high temperatures in Montreal meant many teams were battling rising brake temperatures.

Wolff said he was given additional stress late on as Hamilton pushed to try to overtake Vettel despite knowing he only needed to be within five seconds of the Ferrari to win.

"I think he wanted to make a point that he would have been able to overtake him on track and say 'I've won the race on track'," said Wolff. "Rather than win with the five-second penalty.

"This is what he was trying to achieve. I knew that. I was not [comfortable with that] because the brakes were overheating. But I think it was a racer's behaviour and a racer's decision."