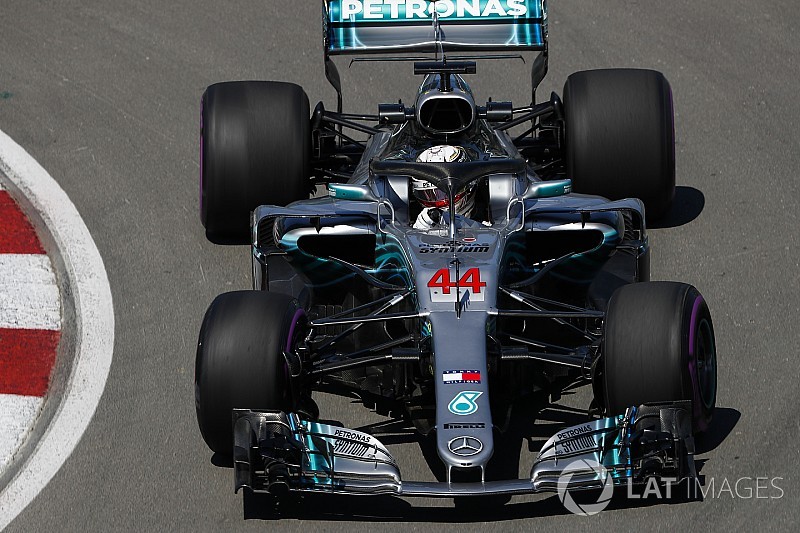 The Mercedes Formula 1 team looks like it will be "hard to beat" in the Canadian Grand Prix on evidence of Friday practice, according to Red Bull's Daniel Ricciardo.

But while Lewis Hamilton, the quicker Mercedes driver on the day, was 0.579s off the ultimate pace, neither he nor teammate Valtteri Bottas ran the hypersoft compound in FP2, as the team had taken fewer sets of the pink-walled tyre for Montreal than any other F1 outfit.

Ricciardo admitted Mercedes' pace on the harder tyres was an ominous sign, hinting that his Red Bull team could find itself consigned to battling Ferrari for best of the rest.

"I would say that Mercedes' pace was really fast today," Ricciardo said. "Even on the harder tyre, they were still doing pretty good laptimes.

"I think they'll be at this stage hard to beat, but I think we can still improve the car a lot, do more laps, learn a bit more and I think we'll be okay.

"I guess the fight will be with Ferrari, too early to really know, but I'm sure Mercedes will be really fast tomorrow afternoon."

Ricciardo's running was disrupted by issues that kept him sidelined for much of FP2, the Aussie believing these to be electrical problems caused by the ongoing 'configuration' of the new-spec engine that supplier Renault introduced in Canada.

"We had what looked like an electrical problem. We had some problems this morning, they tried to fix it during lunch, but it didn't improve, so yeah, we had to try and fix that," he explained.

"We have the B-spec engine this weekend, the upgrade, and I think just configurating a few things on that, we're not necessarily aligned, so we just had to go through a little bit of trial and error.

"A little bit obviously frustrating not to get many laps, but the problem doesn't seem dramatic."

Amid his troubled day, Ricciardo took encouragement from the pace of the car on the other side the garage, while Verstappen himself said: "It was a good start to the weekend, the car did everything it should do, straight away the set-up was right."

The Dutchman stressed, however, that he had "no idea so far" of the magnitude the performance gains from the new Renault specification.

"It's still difficult to say," he claimed, "because you're not going flat out on the engine yet. I think I can tell you tomorrow."

Asked whether his Friday clean sweep meant pole position could be on the cards, he said: "In terms of pole position, I think Mercedes will be very strong again.

"Our car works well, but whether that will be enough in Q3, I don't know."