Mercedes has the fastest pit crew in Formula One at present, Germany's Auto Motor und Sport has found. 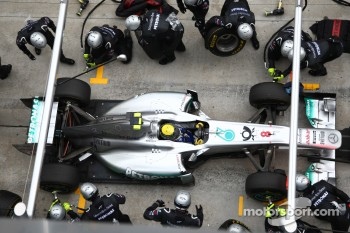 The analysis showed that the Brackley based team, having developed a rim without a separate wheel nut for 2011, was marginally quicker than McLaren and Red Bull at performing competitive tyre pitstops so far.

With refuelling banned last year, and the new Pirelli era radically increasing the number of tyre changes per race, the speed of each team's pit crew is more important than ever.

More attention than ever has therefore gone into pitstop coordination, routines and practice, while teams perfect their technical aids including bespoke traffic lights, wheel guns and jacks. 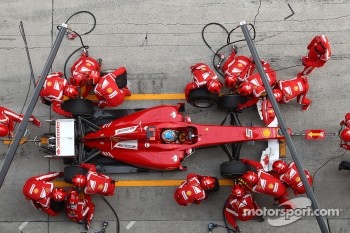 With the time also including the driver's approach and exit from the stop, the analysis found that Mercedes' average in-race pitstop time so far in 2011 has been 22.301 seconds.

That is eight hundredths of a second faster than McLaren's average, while championship leaders Red Bull trail Mercedes by almost three tenths per stop.

Another half-second behind is Sauber, followed by Force India, Renault and - notably - Ferrari in seventh place.

Hispania's pitstops are reportedly 3.3 seconds on average slower than Mercedes'.

Robert Kubica talks to his fans

The essential quality Tsunoda has to harness better

A rapid ascent through the junior categories meant Yuki Tsunoda's arrival in Formula 1 was always going to be much-hyped. It's not been smooth sailing for Red Bull's latest protege so far, but his confidence has never wavered - something he'll need to rely on to continue his progress into the driver he believes he can be.