The Mercedes Formula 1 team is to review its energy deployment for when it next attempts a pitstop undercut after Max Verstappen’s re-pass in the Brazilian Grand Prix left Lewis Hamilton fuming. 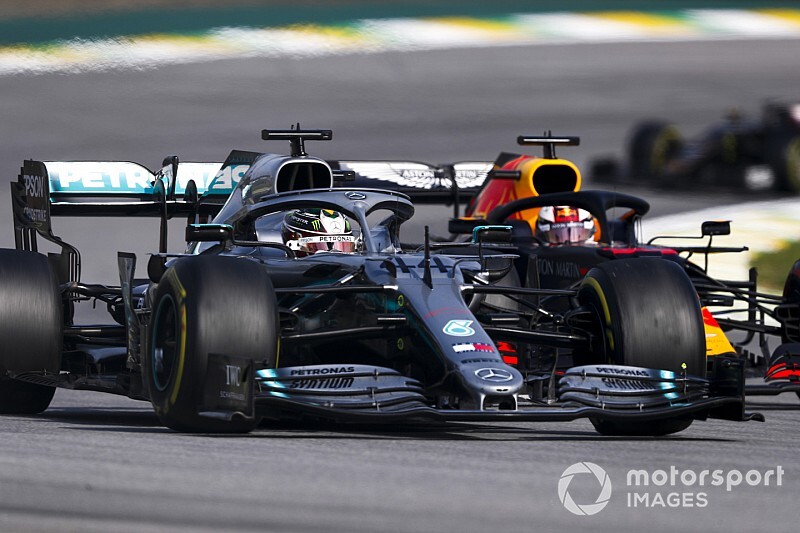 Hamilton jumped into the lead at the first pitstops by undercutting Verstappen at Interlagos, aided when Robert Kubica’s Williams hindered the RBR driver's exit, but he had used so much energy in so doing that he was unable to defend his position when Verstappen attacked at the start of the next lap.

The subsequent radio exchange showed just how hard it is to sustain maximum power levels through an undercut sequence, and then defend against an immediate counterattack on track.

After losing the lead, Hamilton tried to respond at Turn 4, almost pulling alongside before dropping back. He then immediately shouted: “Come on guys, give me the information when my fricking battery’s dead. F**k!”

As he crossed the line at the end of the next lap he said: “I keep getting massive derates, guys,” to which engineer Peter Bonnington replied: “That’s just the Strat 8 effect I think. You’ll be back to Strat 7 levels in one lap.”

Told soon afterwards that he had to “lift and coast for temps” while trying to catch Verstappen, Hamilton asked: “Do I have an engine problem?” Bonnington answered: “I think everything is OK, just temps a little bit hot. You are still in Strat mode 8.”

Mercedes trackside engineering director Andrew Shovlin admitted that Hamilton had struggled to defend himself due to the way energy had been deployed, and that the team might do this differently in future.

“There wasn’t a problem with Lewis’s battery, as in there was no hardware issue,” Shovlin said in a Mercedes video. “But we had gone to a deploy mode when we started this undercut sequence.

“So, that’s on the in-lap. The power unit starts to deploy energy at a rate that’s unsustainable, and it did that over the in-lap and then over the out-lap, and the consequence was eventually that you run out of charge and the car will derate.

“Now, we knew that we had to give it everything to try and be able to make that undercut stick. What we’ll do this week though is just review whether the way we use that energy was efficient enough, whether we could have done something better to avoid Max being able to overtake us on the line.”

Mercedes technical director James Allison admitted that the team couldn’t have known that Verstappen would be delayed in the pits, making it straightforward for Hamilton to jump into the lead – and thus in effect he hadn’t needed to use so much energy on his out-lap.

He said: “If we've known that Williams were going to block Max then, yeah, we could have gone quite easy on that lap! But it's a little bit of hindsight.”

Why Red Bull had Mercedes beat on Brazil's straights