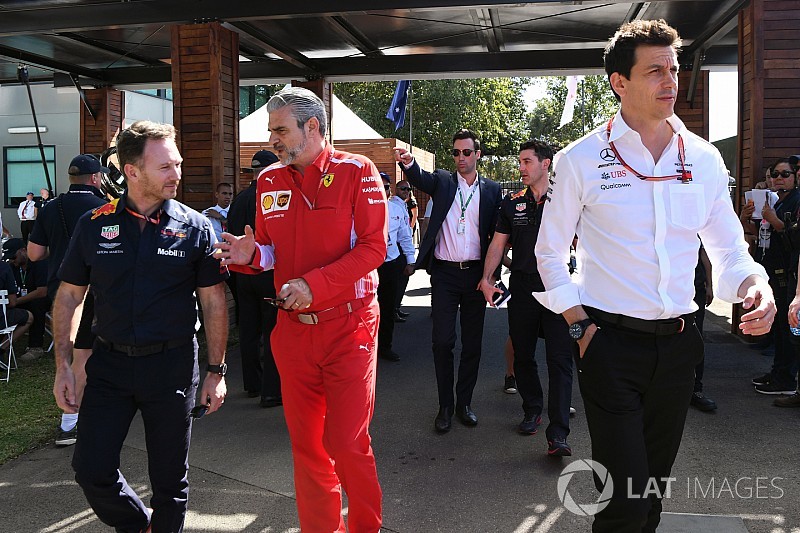 Mercedes boss Toto Wolff insists the German car manufacturer is not trying to be 'opportunistic' in pushing for what it wants in future Formula 1 engine rules.

The German car manufacturer has joined Renault and Ferrari in opposing on cost grounds a bold shake-up to regulations that was proposed by F1 owners Liberty Media and the FIA last year.

This stance prompted rivals to suggest that the manufacturers did not want anything to change because they were trying to protect their competitive advantage.

Wolff has denied that is the case, though, and says that a compromise proposal that has been given to the FIA and Liberty could actually make things harder for his team than an all-new powerplant.

Pushed on accusations that Mercedes is resisting change to stay in front, Wolff told German newspaper Frankfurter Allgemeine Zeitung : "You can't be such a super-opportunist. That will bite you one day.

"For us, a change in the engine regulations would even be desirable because we assume that our structure works at Mercedes.

"To avoid a transformation of performance, we would like to start again from scratch. But that would be expensive. We therefore call for the rules to be more or less maintained.

"In two years' time there will be only marginal differences in performance between the now competing engine manufacturers. Renault will close up this season. And Honda took a big leap."

Although the FIA and Liberty are having to balance the interests of the current manufacturers against potential new entrants, Wolff thinks it would be a mistake to create rules that would guarantee outsiders easy success.

"The entry level is high, as in any competition at a certain level. But no one should insist on being competitive from the outset by changing the rules," added Wolff.

"We also had a difficult phase in 2010, 2011 and 2012, and we only managed one victory in this time. What kind of service would that be to Formula 1 if you cut the rules in such a way that a beginner immediately climbs right up to the front? Good for them if it works like that.

"But I can only warn against artificial levelling. After all, the competing teams have earned their place with hard work and high investments."

Although no details of the compromise proposal from the manufacturers has been revealed, Wolff has suggested that using more standard parts has been proposed to help in drive down costs to help new entrants.

"We think that certain components should be released for distribution and standardized," he said. "In addition, the engine speed should be allowed to increase and the fuel flow should be increased.

"Standard parts should be considered where a new entrant may not want to develop. We would make our technology available or standardise it."

Wolff's comments come against the backdrop of renewed talk of a potential breakaway championship if Mercedes and Ferrari do not get what they want from new rules.

Last weekend, however, Mercedes chairman Dieter Zetsche was clear about how committed the German car manufacturer was to the current F1.

Writing on Linkedin, he said: "People often ask me if Formula 1 is really still relevant. Isn't it just a relic of the past given climate change, rising e-mobility and the self-driving future of mobility? I'm sure some of you have come over these discussions, too.

"From my perspective Formula 1 is absolutely relevant! And maybe more so today than ever."

Zetsche cites F1's technology breeding ground with hybrids, business lessons from running a team and the emotions of the sport as key factors in keeping the sport attractive.

"Formula 1 plays on some of the most fundamental human emotions: passion (for your favourite team or driver), dislike (for the other teams), agony (over a lost race) or euphoria (when it goes well) – along with the sensory experience that comes from the speed of the cars and roar of the engines.

"Formula 1 can provide everything one needs for a perfectly entertaining weekend. All that's why Mercedes keeps investing in racing."