Mercedes said it never considered copying rival sidepod designs this year, despite other Formula 1 teams falling in line with the benchmark Red Bull and Ferrari solutions.

The German car manufacturer went completely its own route for 2022, adopting a ‘zero sidepod’ solution on the W13, which was very different to the downwash Red Bull idea and the inwash Ferrari concept.

But while Mercedes endured difficulties with its 2022 challenger, the team remained adamant that its issues were nothing to do with its very different sidepod solution.

And, with its key focus being on curing the porpoising problems that blighted the start to its campaign rather than worrying about the sidepods, changes it made to most other aspects of its car eventually helped turn its car in to a winner.

Mercedes trackside engineering director Andrew Shovlin said that the team never felt that it needed to focus too much effort on the sidepod solution as it was not triggering a big performance deficit.

Plus, he pointed out, the team has always known that the best route to success in F1 was to push on with its own ideas than simply copy others.

“Most of the engineering, certainly from the aerodynamic point of view, a lot of it are the bits you can't see under the floor,” said Shovlin. “That is where a lot of that work is.

“The sidepod concept was something that we had to commit to anyway for the year realistically. But if we'd been more focused on just trying to find a quick fix, we may have been copying and rolling it out and seeing what it does.

“The goal for us though was always to try and understand it ourselves and learn and find our own path, because if you want to win, and you want to win races and world championships, you don't get there by copying everyone else's design.

“All our other cars have had pioneering features on them, they had clever ideas. We have tried to be leading with the technology, so we'll carry on doing that.” 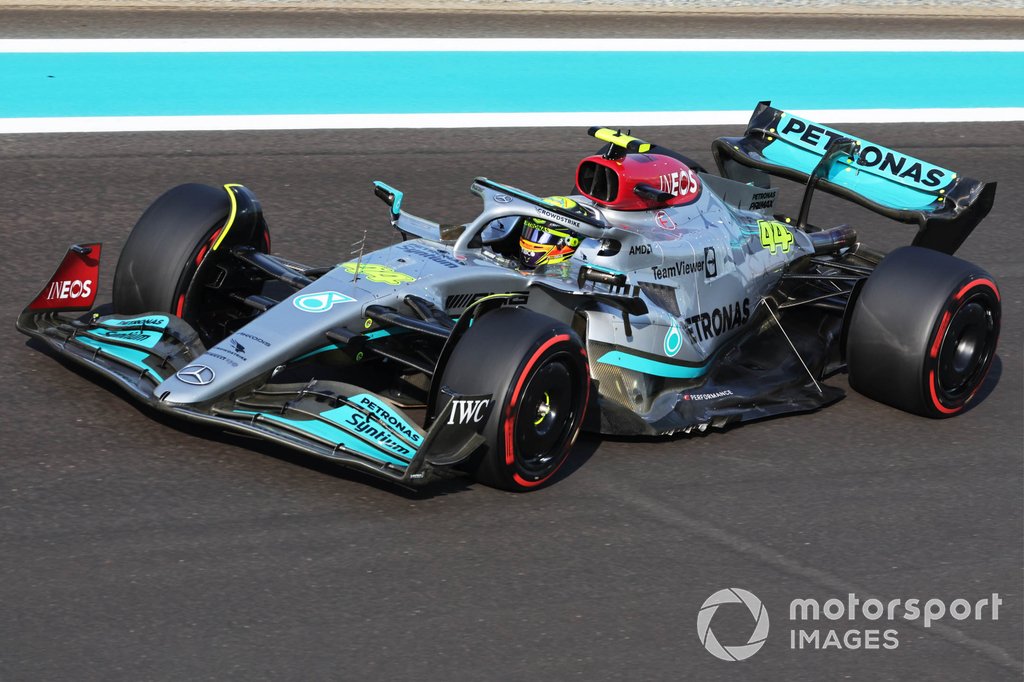 Despite sticking steadfast to its sidepod solution for 2022, Mercedes could yet make a switch for next year as it ponders a rethink of its car concept.

Red Bull’s sidepod design was not the only thing that grabbed attention this year, because it was the team’s low-drag concept – which helped deliver impressive top speed – that gave it a big advantage over the course of the campaign.

Shovlin said that Mercedes, which suffered from high drag, was aware of the characteristic, but was not obsessed with simply boosting straightline speed potential in 2023.

“When you've got a completely new set of rules, it's difficult to know where everyone is going to design to,” he explained.

“Their car looks like it has less drag if we put the same wings on it. In the earlier part of the year, we were having to run very high [downforce levels], which was certainly not helping from that point of view.

“But when you are very similar, obviously, it's a nice advantage to have. So it's something we'd like to fix. It's just that the priority will always be the base performance of the car and getting that in the right place.”

Mercedes managed to address most of its porpoising problems over the course of the campaign, but still encountered a few issues later in the season.

Shovlin says he is mindful of the problem returning as the team adds more downforce to the car over the winter, but he reckons new floor edge rules will also help it overcome some of its most obvious problems.

“The more you load up the floor, the more you can trigger those problems,” he said. “Where we have made very good progress is in the straightline. So back in Imola, Jeddah, Bahrain, all those early races, the car was bouncing really badly at high speed. And we managed to get a really good handle on that.

“There were still issues we got when the car rolled in a fast corner and the floor gets to a point where it's touching. And that can cause a bit of unsteadiness. But the rule changes for next year will help that.

“Fundamentally, though, they're not going to make the problem go away. They'll make it a bit easier for the teams. But we're hopeful that the work we put into the learning and the understanding in the early part of the year will help us at least develop to a good baseline next year.”