Mercedes Formula 1 drivers Valtteri Bottas and Lewis Hamilton have acknowledged their rivals at Ferrari and Red Bull appear "too quick" at the Sochi Autodrom after making "serious" gains over Friday practice. 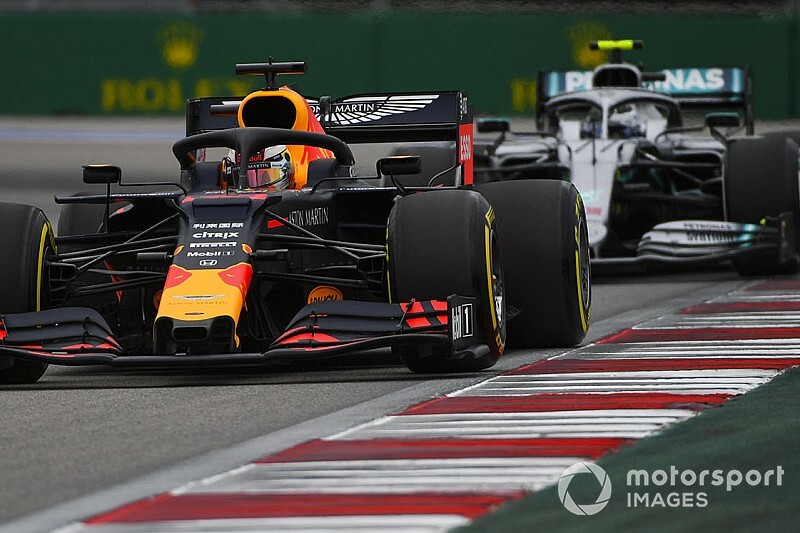 Mercedes is unbeaten in the Russian Grand Prix since it joined the calendar in 2014, but Hamilton and Bottas ended Friday’s running at Sochi significantly off both Red Bull’s pace-setter Max Verstappen and the lead Ferrari of Charles Leclerc.

“It started off not too bad and it just didn’t really improve as the others made some big progressions,” Hamilton explained.

Hamilton said it was the “million-dollar question” whether Mercedes could make enough of a step to take the fight to its rivals on Saturday.

“Naturally I believe in my guys,” he said. “I don't think we’re getting the maximum out of the car and that’s probably been the key issue we’ve had for the last three races, so we’re still trying to discover it.

“It's good to see the competition doing so well but I want to be in the fight with them and that’s what we're working towards.”

Both he and Bottas however admitted they would welcome the possibility of rain on Saturday, with the Finn suggesting it would offer Mercedes the best chance to be in the pole battle.

Verstappen, who had set the pace by three tenths over Leclerc, said his Friday pace had been encouraging, “especially after our difficult weekend in Singapore”.

“It was a bit of a weird weekend in Singapore, what went wrong. So we came here and the car’s working really well, especially the last sector has been very good.

“But even the first one, you have a long straight, Turn 3 is flat out so is basically also a straight, and we are still very competitive.

“So it was a positive day, we tried quite a few things with the car and it seemed to work.”

Verstappen faces a five-place grid penalty for Sunday after having taken on a new-spec Honda internal combustion engine, but said this was “not too disappointing” even in light of his strong Friday showing.

“If you are quick you can still pass some people,” he said. “It’s always difficult to judge to take a penalty. If I would have thought Singapore would have been that difficult, you might have taken the penalty there.

“I’m not too disappointed. You can overtake around here and if you’re fast you can get to the front."