Niki Lauda reportedly tried to keep Brawn on board in a new role, but the Briton has pushed ahead with his decision to leave.

Nov.28 (GMM) Mercedes will announce on Thursday that Ross Brawn is leaving the German team.

Brawn, 58, has been the Brackley based team's principal since even before the Stuttgart marque took over in 2010.

But Paddy Lowe, the former McLaren technical director, arrived at Mercedes earlier this year and has always been in line to succeed Brawn. 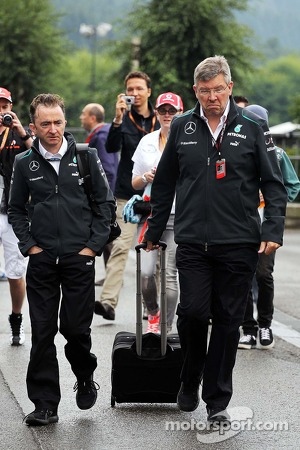 Mercedes team chairman Niki Lauda reportedly tried to keep Brawn on board in a new role, but the Briton has pushed ahead with his decision to leave.

Germany's Bild said Brawn announced his decision to team staff at its Brackley headquarters on Wednesday.

The news will be made official on Thursday, the major daily newspaper added.

Bild added that Lowe will now split Brawn's responsibilities with Austrian Toto Wolff, with triple world champion Lauda continuing to oversee the board.

The report said Brawn will take some months off to indulge his passion for fishing, but that there is a "very good chance" he will return to F1 with McLaren's 2015 engine supplier, Honda.