Mercedes “under-delivered” in Austria due to compact radiators

Mercedes has revealed the cooling problems that made its Austrian Grand Prix “painful” were a legacy of the fundamental design of its Formula 1 car being too “optimistic”. 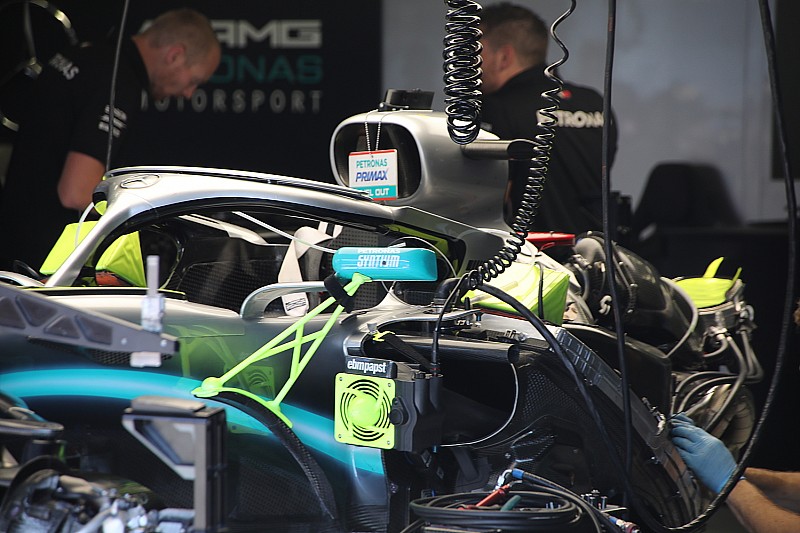 Valtteri Bottas finished third while championship leader Lewis Hamilton finished off the podium for the first time this season in fifth position, as Mercedes’ 100% winning start to the season ended in extremely hot conditions at the Red Bull Ring. Mercedes team principal Toto Wolff referred to the car’s cooling as its “Achilles’ heel” after the race, and admitted that the team was “carrying the problem” since the start of 2019.

In Mercedes’ regular post-race Pure Pitwall video, trackside engineering director Andrew Shovlin has outlined how the pursuit of aggressive packaging has led to the W09 having a cooling system that has “under-delivered” in the hottest temperatures.

“Fundamentally the car doesn’t have big enough radiators,” said Shovlin. “And that’s something that we were a bit optimistic with how much we could get out of the cooling system.

“It’s under-delivered to what we hoped we could achieve, and it’s meant that we are carrying this issue where in the very hot races we will be struggling to keep everything cool enough – principally to keep the power unit cool enough that we don’t do any damage to it.”

“You can increase the amount of cooling you get out of the car by opening up the bodywork exits,” explained Shovlin. “In Austria it was 35C degrees, that actually put us at the upper end of what we could achieve just by opening the car up. So, we were on limit. When you get to that point you are really limited in your options.”

Bottas and Hamilton were hamstrung during the race and defeated by both Ferraris and the Honda-powered Red Bull of Max Verstappen. They were unable to attack as the grand prix developed because of the extent they were trying to manage temperatures.

Shovlin said they were lifting-and-coasting for “around 400 metres per lap” – almost 10% of the Red Bull Ring layout.

“That is why they were so compromised on performance,” Shovlin added. “You can also turn the engine down a bit, then it will generate less heat, but you’ve got less power and you are slower on the straights. So, it was definitely a significant limitation in Austria.”

After the race, Wolff said Mercedes was pushing to resolve the problem as soon as possible – indicating that despite the cause being linked to a fundamental element of the car’s design, it does not have to be a permanent feature.

Shovlin added: “We are working on systems – we were working on them before Austria – to try and improve this problem and we should be in a better position.

“But, it all really goes down to the fundamental design of the car, where in the push for very, very tight packaging, we have ended up being undercooled overall.”

Promoted: How Abu Dhabi offers some of the best views in F1