We have reported that the German marque has already tested the F-duct style concept at the front of its newly-launched W03 car.

The Finnish broadcaster MTV3, describing the system as 'W-duct', has provided some detail as to how it works.

When the car is being driven in a straight line, air flows into the tip of the silver car's nose and is dispersed in a W-like pattern across the length of the front wing. 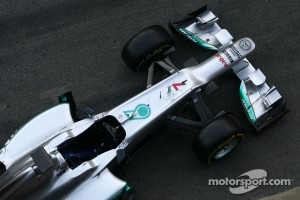 But when the car is cornering, the air flows more predominantly to one side or the other, improving the balance and handling.

Unlike the driver-operated rear wing F-duct, which was banned for 2011, Mercedes' system is entirely passive and requires no moving parts, and is therefore legal.