Mercedes did not have right package for Spa/Monza - Wolff 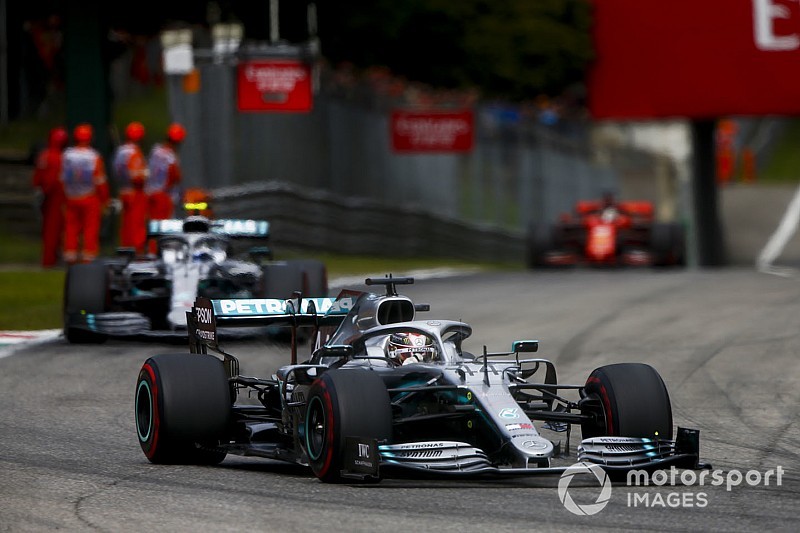 Mercedes boss Toto Wolff says Mercedes always knew that it had the wrong car package for the high-speed Spa and Monza circuits.

Charles Leclerc pulled off his second successive victory in the Italian Grand Prix on Sunday after once again facing race-long pressure from Mercedes, which kept him on his toes.

But while Mercedes was slightly disappointed to have just missed out on the win again, with Lewis Hamilton having come close to getting past Leclerc at one point before being forced wide, Wolff conceded that there was only ever a slim chance of his men coming out on top.

"I think we knew that we didn't have the right package for Spa and Monza," admitted Wolff.

"Actually second and third was an optimum result for us on the grid, and I said before if we would finish the race in these positions, we'd probably take it.

"As racers now, at the end, obviously there's the feeling of - not entire happiness. You're trying to follow a car, DRS wide open, a long straight, and you're not able to come anywhere close. That is obviously you feeling like not fighting with the right weapons here.

"But I don't want to take anything away from Ferrari and from Charles. They had the strongest package and an upcoming great, hard-driving young man. You've got to give them the credit."

While Mercedes opted for a different tyre strategy to Ferrari, having gone for the medium at their stop rather than the hard, Wolff does not think that choice played a factor in it losing out to Leclerc.

"We talked about the hard in the morning but we only saw it on Charles, and that tyre was really offset in the long runs on Friday," explained Wolff.

"Race day was warmer, so the tyre was good, but I think honestly our pace on the medium would have been much faster.

"I don't know by how much but considerably faster than Charles. If you can follow somebody on the gearbox like Lewis did, over multiple laps, just not being able to do the move because you're lacking the straightline speed, then you can see that the medium was the better tyre."