OPINION: With a former first lady of America, the king of basketball and the GOAT of all NFL quarterbacks in the house, the on-track Miami GP show was never going to outshine the off-track A-listers.

The standout performer of the Miami Grand Prix for me wasn’t Max Verstappen or Charles Leclerc or Esteban Ocon – although they were all pretty mega. It was Martin Brundle, whose TV grid walk for Sky Sports F1 came as close as possible to making some sense of the insanity of this bonkers, celeb-packed new event on the F1 schedule.

As he bounced between the likes of the Williams sisters, Pharrell Williams and (not) Patrick Mahomes (who turned out to be Duke basketball’s potential NBA star Paolo Banchero), it was an incredible piece of entertaining television. Brundle’s air of mild bemusement by the whole spectacle really made it feel like you were along for the bizarre ride where you hadn’t a clue what would happen next. 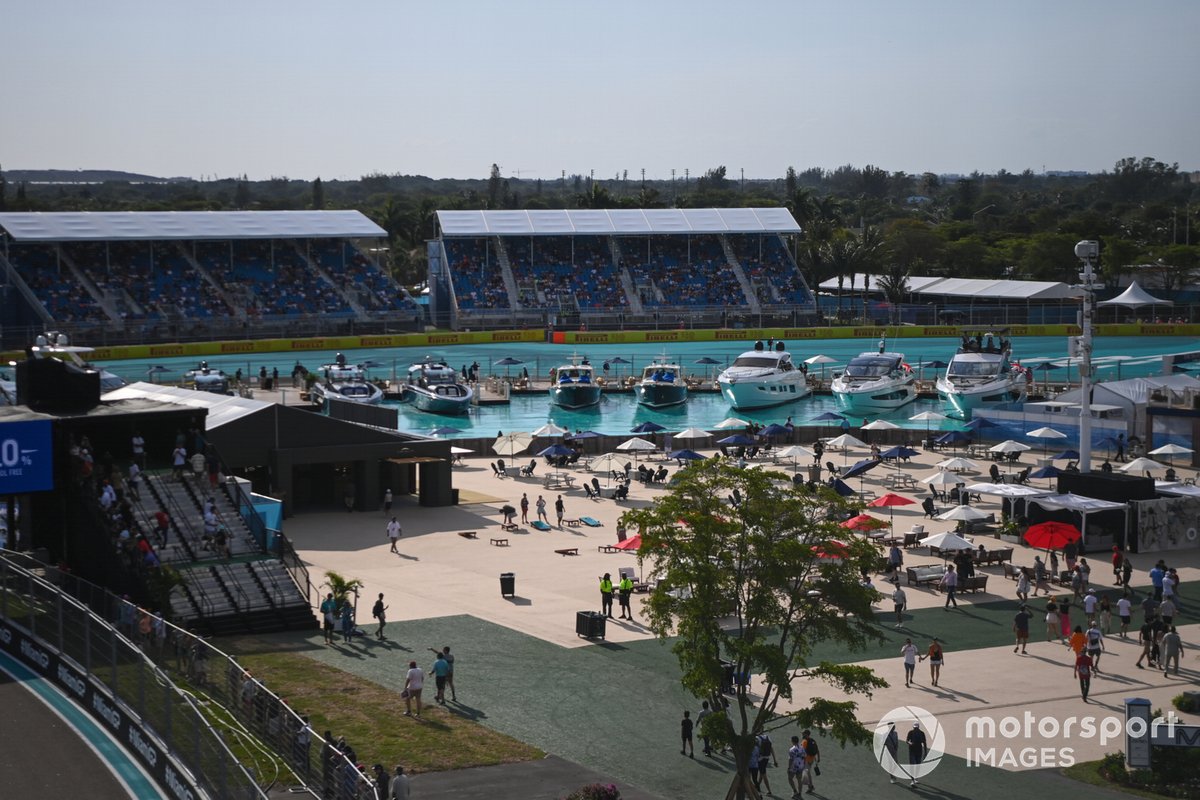 The artificial marina created at the circuit

This could only happen here. I’ve lived in Miami for over seven years now, so it was no surprise to me when I heard about the fake marina, the cable cars over the track or the Hard Rock Beach Club (complete with basking fake mermaids) – where they paved a parking lot and put up a paradise.

It was so very Miami, a car chase that was only missing Don Johnson in his Ferrari Daytona (and remember, was fake too).

For all the gripes though about the ‘Americanization’ of F1, the one thing that wasn’t touched was the sporting spectacle. No attempts were made to jazz-up that side of things, no timeouts or dancers on the track during the safety car period. Sure, there were world-class DJs in the house, spinning their tunes between sessions, but pretty much everything in these parts happens with a thumping backbeat anyways.

And so what if Pirelli gave the podium finishers football helmets to wear instead of caps at an NFL stadium? They did Stetsons at COTA, Ushankas in Sochi and Sombreros in Mexico City. 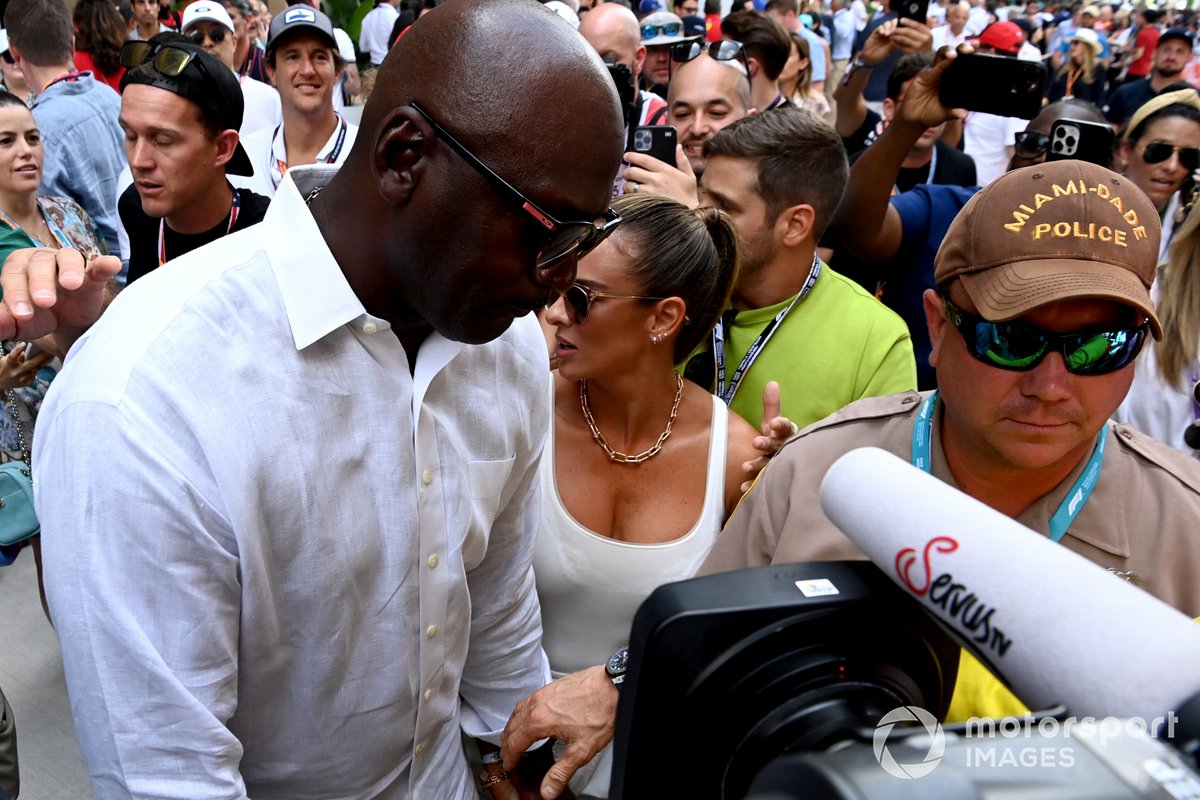 For anyone present at the Hard Rock Stadium, getting the chance to be in the same zip code as Michelle Obama, Michael Jordan and Tom Brady made your day before a wheel had turned. For the rest of the world, the jealousy was palpable across social media – whether you knew who these celebrities and influencers flouncing around were or not.

If you were on site, chances are you’d paid a pretty penny for the privilege. SeatGeek revealed the event’s raceday tickets had an average resale price of $2,414. By comparison, Austin’s COTA tickets are reselling at just over $1k, while NASCAR’s Daytona 500 was $311 and the upcoming Indy 500 is $361. A buddy of mine bought six tickets, then sold four – two of which covered the seats he used himself. Then he made a $3k profit on the other pair!

Without wishing to brag, I wangled myself into the Paddock Club East – which offered a sensational view of the Turn 1 braking zone that I’d spotted as a perfect vantage spot from my previous visits to the venue while it was being constructed. 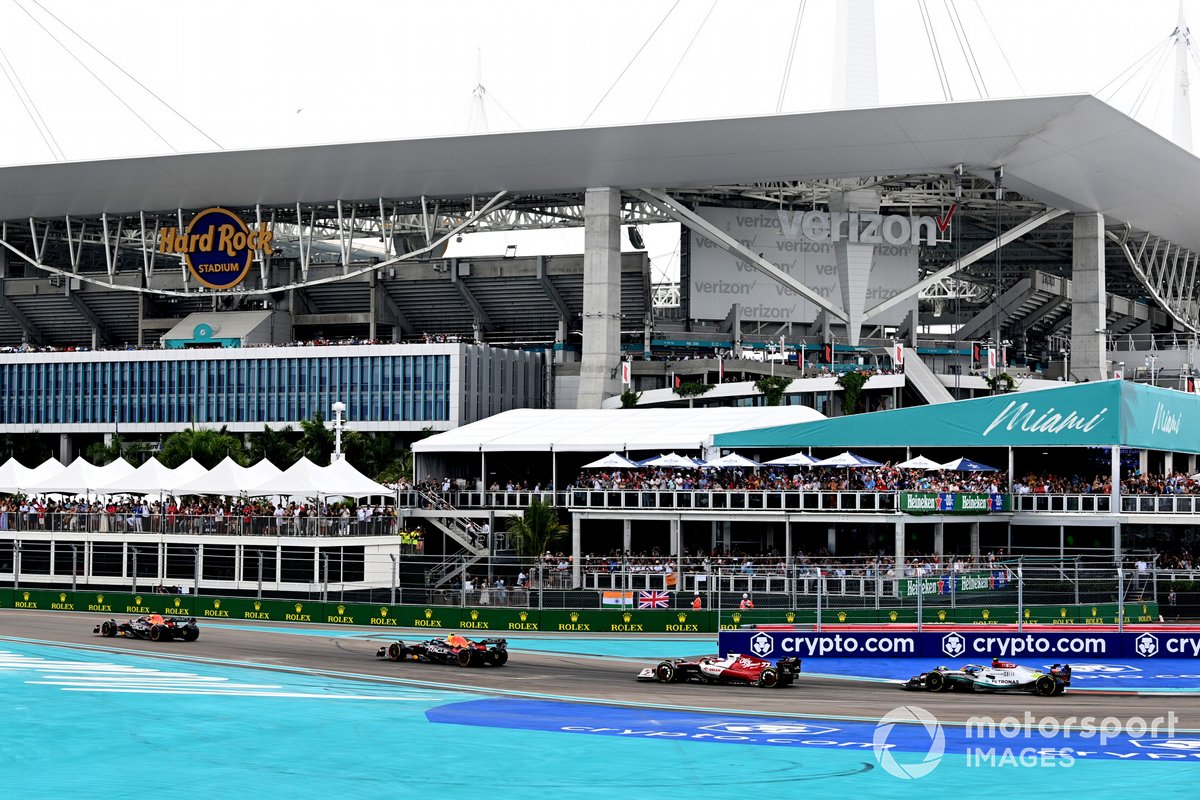 One of the many things TV missed at the weekend was Turn 1, Lap 1 of Free Practice 1: Almost every driver outbraked himself and went off! The crowd loved it as mistake after mistake unfolded, and even when the drivers got their head around the braking point – which was clearly earlier than their sims had led them to believe – Charles Leclerc and Yuki Tsunoda had wild spins.

I was in the VIP seats thanks to F1’s bubbly supplier Ferrari Trento, who revealed that 50,000 bottles of their fine fizzy wine had been enjoyed by the 200,000 fans at the track and in the Miami-Dade region over race weekend. And the mind boggles at the merchandise sales that must’ve taken place – Red Bull, Mercedes or Ferrari caps seem to be the must-wear item on South Beach’s Lincoln Road right now.

A prosperous and popular F1 is a good F1 in my mind, especially in a market it had struggled to truly crack for so long. 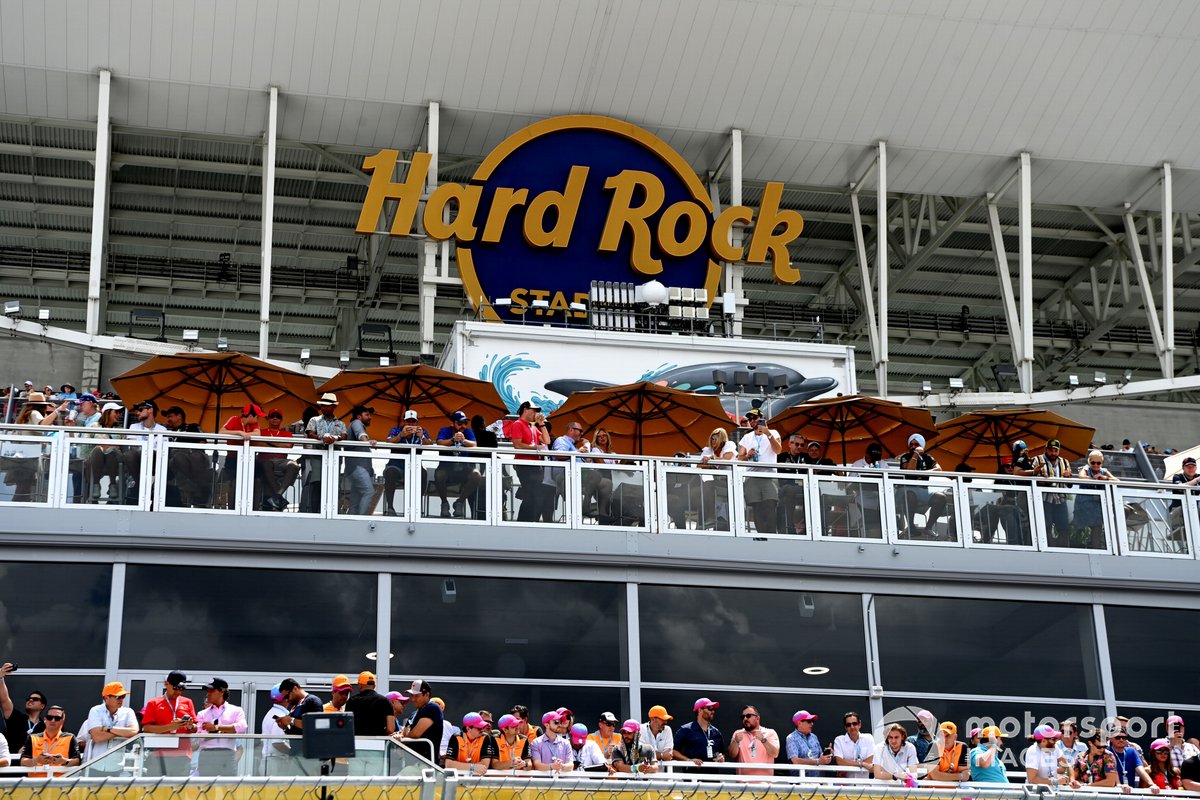 But if you’re feeling ‘well jel’ about the stacks of VIPs flashing their cash, you can have the last laugh, as a major hospitality fail meant that there was a lack of food on offer on Friday. There’s something extra angry about rich people being denied things – especially with the premium price they’d paid for the posh seats. You didn’t get to read much about it though, as the food supply in the media centre was plentiful!

A huge plus point for me across the weekend was the number of women who attended the race. It was as close to a 50/50 split as I’ve ever seen at a racetrack, and they weren’t being hauled around by husbands or boyfriends – in many cases it seemed the other way around.

The female contingent all around the Miami Campus appeared completely engaged with the event and knew exactly who they were cheering for and why. It explains some of the uplift we’ve seen in the latest F1 Global Fan Survey; that Drive to Survive impact has been hugely positive for female interest in the sport, not just the U.S. audience in general. 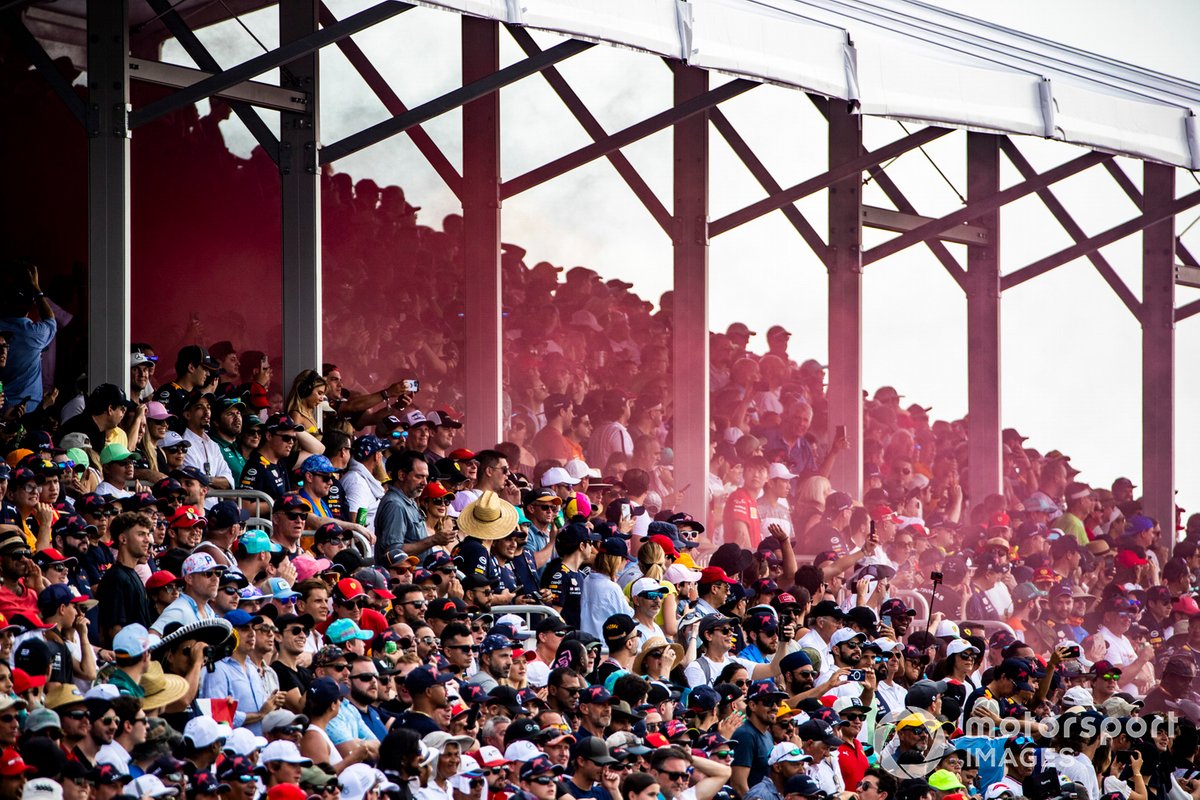 Fans fill out a Miami grandstand

On the subject of television, live coverage on the ABC network produced an audience of 2.6million – F1’s biggest-ever number in U.S. history (previous record was 1.7m for Brazil 1995) but that was a tad down on NASCAR’s impressive tally on FS1 from Darlington, which started at the same time.

One thing that did strike me as odd was the timetable of the weekend. Not only clashing with NASCAR, pushing it into the late afternoon in Miami in May was asking for thunderstorms – and they got lucky with the direction the wind was blowing during the daytime, as the heavens only really opened at the track during the evenings.

With the Spa debacle still fresh in mind, the usual protocol of dealing with electrical storms in the U.S. is to halt the racing and evacuate the crowd from the grandstands until there hasn’t been a lightning strike within 10 miles for 30 minutes. Imagine that for the show? I was told that there was a “very detailed plan in place” for lightning – although nobody would tell me what it actually was… 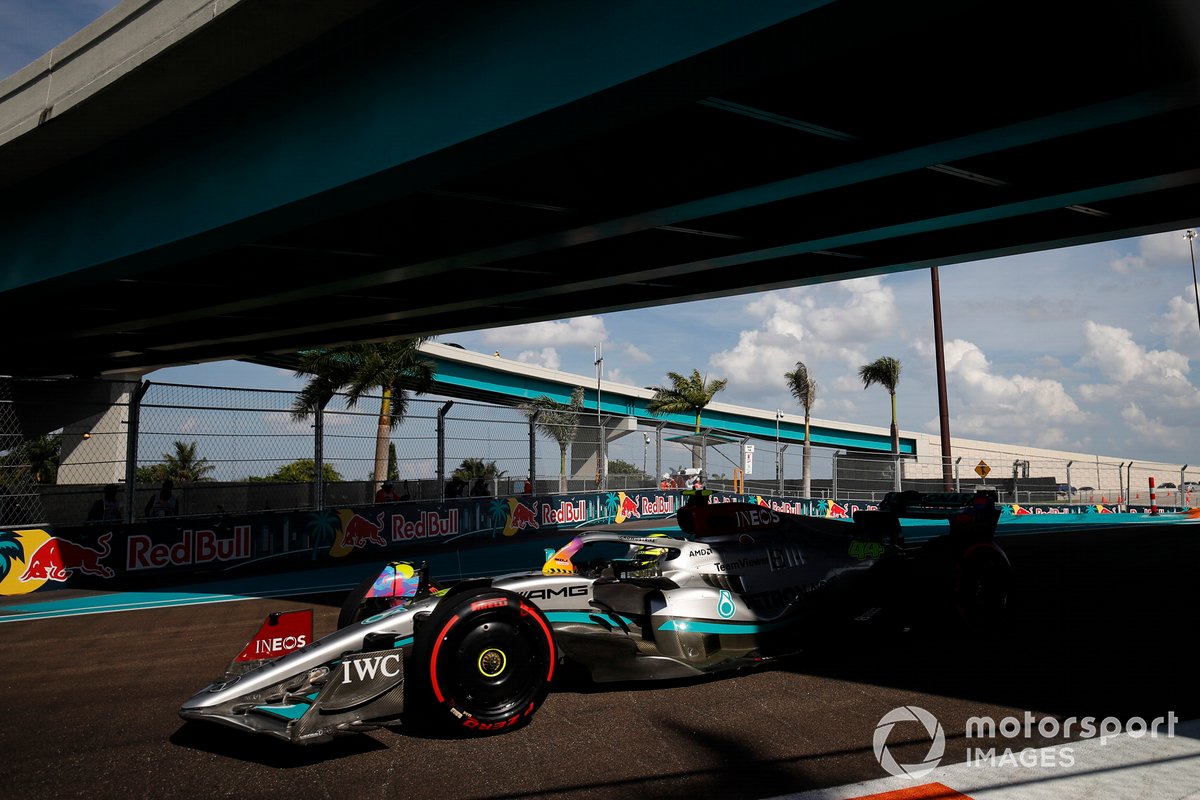 The drivers loved being in Miami but, as usual, found something to complain about with the track. For me, it was a key to this event’s success that the track was different – it needed a USP, especially with a Las Vegas street track coming next year. The stadium gave a unique backdrop, and the track’s unusual surface gave teams and drivers something to think about.

I grabbed a Pirelli hot lap of the track on Friday – as my previous circuits here had been in a golf cart and a Ford F-150 truck! – and from the passenger seat of an Aston Martin Vantage, the contrast from the fast and flowing sections to the twisty sections following the Turn 11 hairpin was huge. Again, it’s something that sets the venue apart – and I don’t think it’s a bad thing having drivers complain about that chicane: they’re meant to be the best in the world, so the last thing it should be is ‘easy’. 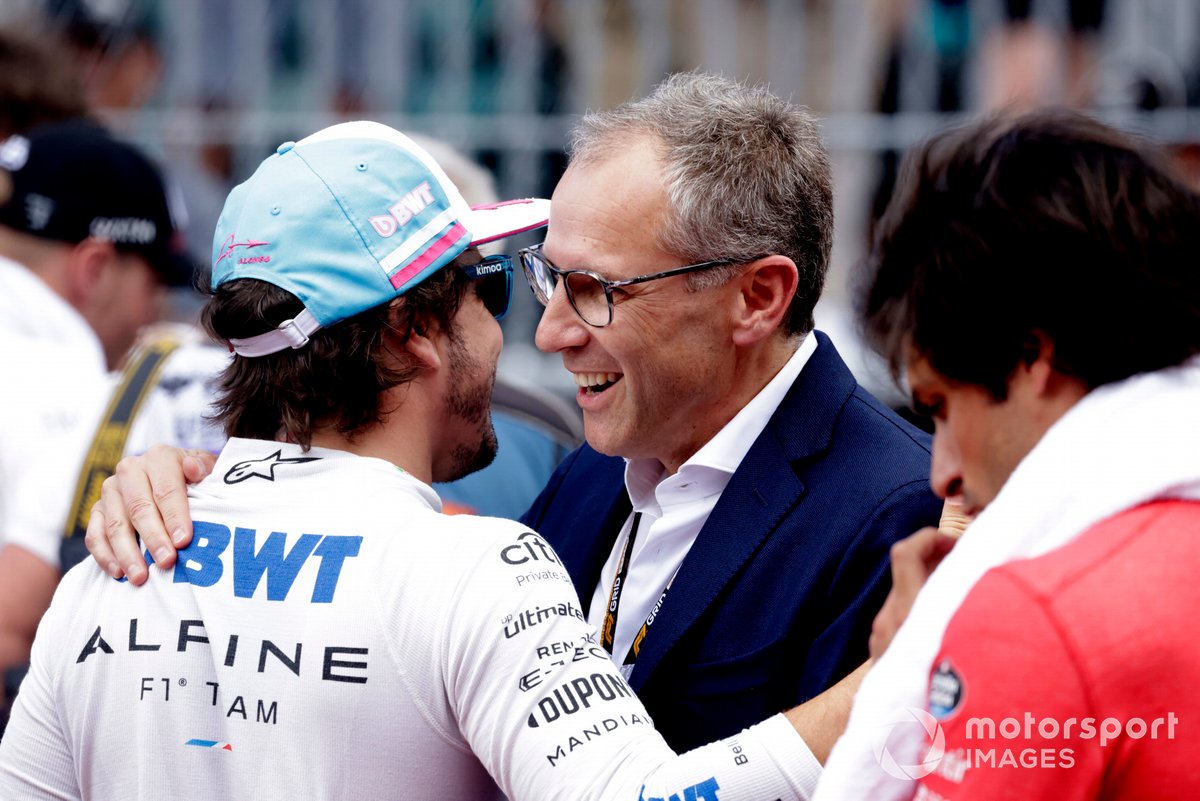 As Stefano Domenicali told us: “If they are not happy there is a lot of sport to do. I'm joking!” Many a true word spoken in jest, Stefano…

He added: “As always, we need to look into perspective, the bigger picture. What we have lived this weekend is huge for the sport.”

Quite right too. The Miami GP couldn’t have been just about the racing on track to justify its presence on the schedule, because sport here is nothing without spectacle. 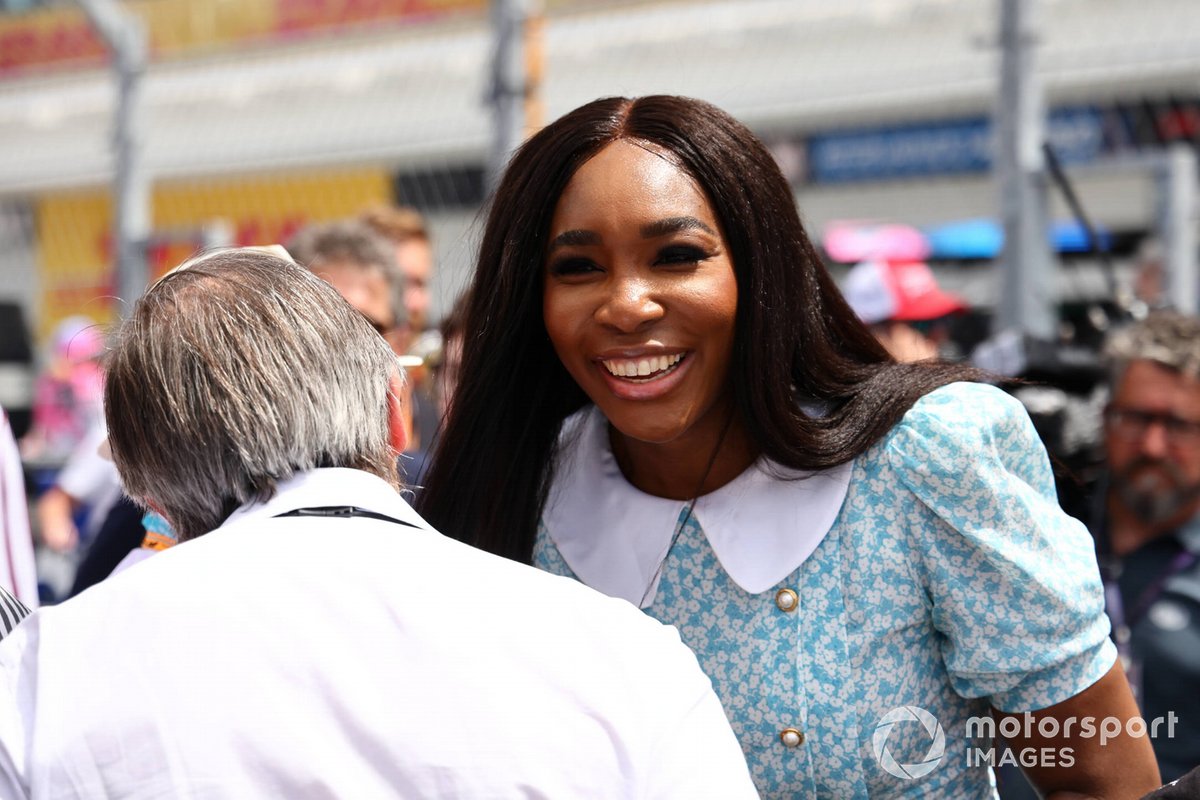 Venus Williams on the grid

Even if you could have guaranteed racing like Villeneuve/Arnoux at Dijon ’79, combined with the crash chaos of Silverstone ’73 with Max Verstappen crossing the finish line backwards, people would still have been talking about that incredibly awkward silence between Brundle and Venus Williams on the grid walk…

Like Monaco, which even has a real marina, this race should be celebrated for what it is – an outlier that should never be regarded as the norm.

Mercedes has no answer on Miami GP performance loss

Ricciardo: Weight saving on drink made Miami F1 even tougher