Ralf Schumacher earned praise from his team and from his brother after his performance at the Japanese Grand Prix, where he scored a second place finish. It was Ralf's second race back in action for Williams after the crash at Indianapolis that ...

Ralf Schumacher earned praise from his team and from his brother after his performance at the Japanese Grand Prix, where he scored a second place finish. It was Ralf's second race back in action for Williams after the crash at Indianapolis that sidelined him for three months, and he joined winner Michael on the podium, which pleased Ferrari's champion. 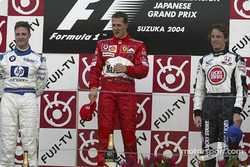 When asked what made him happy about his victory at Suzuka, Michael replied: "The fact that Ralf was on the podium with me. We asked ourselves when it was that it had last happened as we are not ones for remembering statistics."

"The only thing that came to mind was the Canada race. Naturally, it is not influential; the important thing is the Ralf is back with us. He proved to all of us that he has always to be taken into consideration."

Michael was correct that the last time he and Ralf were on the podium was in Canada, in first and second respectively. However, Williams was disqualified after the race due to brake irregularities, as was Toyota. Therefore Japan was officially Ralf's first podium finish of the season.

Williams' director of engineering Patrick Head also had good things to say about Schumacher Junior. "We're certainly pleased to be on the podium, no doubt about it," he commented. "Two cars in the points and we've pulled ahead from McLaren. It was a fantastic drive from Ralf, he did just what he needed to do at the right time."

Ralf will leave Williams at the end of this season to join Toyota for 2005. He has been with Williams for six years and the team will be a little sad to see him go. "Everybody in the team has said what a pleasure he has been to work with," added Head. "He's a very fast driver, he's very good and deserves to get results."