Former Minardi Formula 1 driver Tarso Marques says he was terrified that he was going to die after a serious case of the COVID-19 virus, from which he is now recovering.

By:
Carlos Costa
, Repórter
Listen to this article

Speaking to Caras magazine, Marques – who started 24 Grands Prix across three seasons for Minardi – revealed he had 85% of his lungs compromised and was rushed to intensive care in hospital.

The 45-year-old, who now runs a vehicle customization company and also raced in IndyCar and Brazilian Stock Cars, reported that he “even made a will” while he was in hospital.

“I thought it was all right – I was always very healthy, I had good nutrition, I did physical activity,” said Marques. “I thought that nothing would happen to me. What I really cared about was my parents.

“Two hours after this new diagnosis, I was already short of breath. Another hour and I couldn't breathe anymore. Now, speaking in this interview, I still only have 30% of my lung capacity.

“The first three, four days in the hospital were like terror. You are practically dead there. It destroys you. I got so much medicine – every three hours a tray with an injection, corticosteroids [anti-inflammatory steroids]. I spent nine days without sleep, I used oxygen at the limit.

“And it happened one thing after another – stomach pain, there is an allergy out of nowhere in my legs, I am still full of spots, I was sobbing for two whole days, I had a hellish headache. The virus is attacking every place.

"It looks like it doesn't give up. I thought I was going to die. I even made a will. I stayed like that for two more days. When I started to get better, at night I was afraid that improvement was a false alarm.”

Despite the serious nature of his symptoms, Marques is now expected to make a full recovery by his doctors. 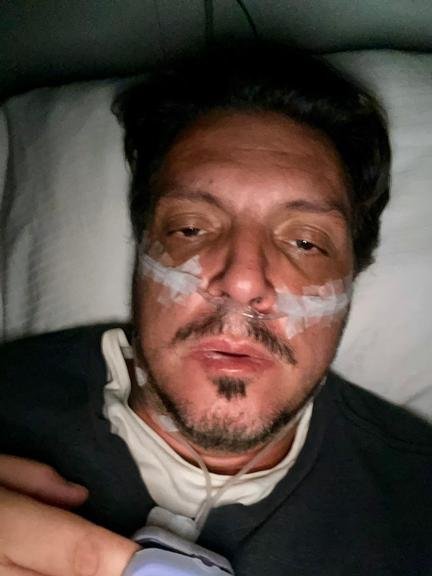 Tarso Marques in hospital with Covid-19