Best Bridgestone runner in China and rookie of the year for Tiago! "It was an insane, incredible GP!" Tiago Monteiro summarized. The 19th and final round of the 2005 Formula one world championship was definitely insane and dishevelled, with two ...

Best Bridgestone runner in China and rookie of the year for Tiago!

"It was an insane, incredible GP!" Tiago Monteiro summarized. The 19th and final round of the 2005 Formula one world championship was definitely insane and dishevelled, with two appearances of the safety car, the first being caused by... a loose drainage cover! However, Tiago showed how calm and cool headed he is once again by managing the safety car periods perfectly and ended up crossing the Chinese line in eleventh place. 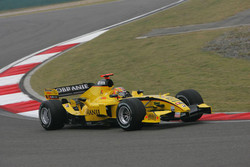 The Portuguese driver was in fact, the best classified Bridgestone runner - ahead of Ferrari - and finished the 2005 season with the honorary title of 'best rookie of the year'. Tiago's statistics are unique in the history of the Formula One as never before has a rookie driver shown such reliability: 18 GP finishes out of 19, a podium and 7 points in the driver's championship!

"I can only be happy about what I have achieved this year in my first season of Formula One," smiles Tiago. "I am the best rookie in the series, I beat a 40 year old record old that belonged to Sir Jackie Stewart - the greatest number of races finished by a rookie."

"I had a very good first stint but my first pit stop was before the appearance of the first safety car and because of this my strategy was ruined," analysed Tiago. "All my rivals exploited the safety car to take their stops and lose the bare minimum, time wise."

"Therefore I had no other choice than to attack to the maximum until the chequered flag. I found myself in a battle with Coulthard, Button and Villeneuve for tenth place, and another battle near the end with Trulli, Pizzonia and Rubens!"

"My last race of the year was very good and I am happy with it because it is important to finish the championship on a positive note. I received congratulations from many people this year, and my results exceeded all the hopes of my team, with two points finishes and a podium. I am very proud and happy of what I have achieved and these results give me confidence for next year."

"I would like to take this opportunity to thank all the members of the Jordan team who helped me to secure these good results. A big thanks to Dr. Lauentino Dias, Secretary of State for Sports, all my partners and sponsors and finally to my Father who was always by my side. His moral support was essential to me throughout the year."

"Also, thank you to Jo?o Lopes and all his team of Adventures of the World, my lawyer Didier Poulmaire, Duarte Cancella de Abreu and all the team of DCA Public Relations".