Juan Pablo Montoya defended his first win at Monza last season after some suggested he only gained victory due to the unsettled atmosphere over the weekend. The 2001 Italian Grand Prix took place only days after the tragic events of September 11th ...

Juan Pablo Montoya defended his first win at Monza last season after some suggested he only gained victory due to the unsettled atmosphere over the weekend. The 2001 Italian Grand Prix took place only days after the tragic events of September 11th last year and everyone was affected by what had happened. 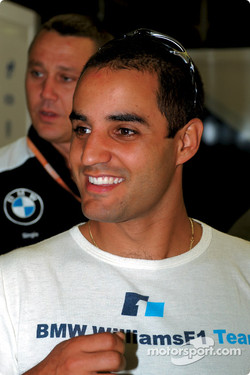 Juan Pablo Montoya.
Photo by BMW PressClub.
Not only were people struggling to come to terms with the attack on America, CART racer Alex Zanardi had a terrible crash in Germany the day before the race, losing both his legs. The racing world was shocked by both events and it was debated if the Italian GP should go ahead.

It did, with Montoya claiming his maiden F1 victory but some said the Colombian only won because Michael Schumacher was off form due to being upset by the tragedies surrounding the weekend. Montoya dismissed that: "I think I would have won that race regardless," he said. "Even with nothing in the background, I think I had the pace to win the race."

"I think it was tough for everybody, including myself. But I believe that when you are in the car and in the job, you've got to concentrate and do it. I remember Gerhard Berger in Hockenheim, he won the weekend after his father died. He put the car on pole and won the race by miles. He was probably pushing more, was more determined to do well."