New look for BAR in China

This weekend the entire Lucky Strike B.A.R Honda team will be sporting new colours designed and prepared specifically for the inaugural Chinese Grand Prix. Jenson Button, Anthony Davidson and Takuma Sato with the BAR-Honda 006 in the '555' ... 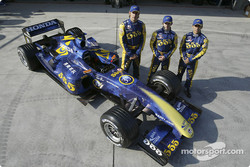 Jenson Button, Anthony Davidson and Takuma Sato with the BAR-Honda 006 in the '555' livery.
Photo by LAT Photographic.

To promote British American Tobacco's popular 555 brand, all team members, including all three drivers, will be wearing special blue overalls and clothing throughout what's already a milestone event for B.A.R, its partners and all involved in F1. Adding to the stunning new look, the B.A.R pit garage in Shanghai will also be showcased by new blue 555 hordings.

Completing the picture, Anthony Davidson's test car has been finished in distinctive new 555 livery which includes chinese lettering. Anthony's blue car is sure to be a major attraction and talking point during both of Friday's two Free Practice sessions.

Glock to replace Pantano at Shanghai