Nick Heidfeld is something of an optical illusion. Physically he's undeniably small, but in a strange way he seems bigger than he actually is. For his vertically challenged, slender physique, he has an awful lot of presence. At the Sauber launch in ...

Nick Heidfeld is something of an optical illusion. Physically he's undeniably small, but in a strange way he seems bigger than he actually is. For his vertically challenged, slender physique, he has an awful lot of presence. At the Sauber launch in Z?rich on February 9th, Heidfeld was a nice enough to spare me the time for a quiet chat at the end of a long afternoon of media interviews.

This was at the expense of Heinz-Harald Frentzen, whom I was currently in an interview with at the time. I have no grudge against Frentzen but when a PR girl fished me out of his group interview to talk to Heidfeld alone, I wasn't about to object. 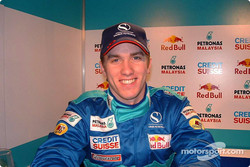 Nick Heidfeld.
Photo by Nikki Reynolds.
Nick had a rather unhappy start in his Formula One career with Prost in 2000. The car was difficult and uncompetitive and Nick did not settle well into the team, but he was not to be put off. "No, not at all," he replied when I asked if it had dented his confidence. "It was very difficult but I still had lots of driving. It was just..." he paused a moment, pondering, before continuing. "The biggest problem was putting a lot of effort into a lot of things and not seeing any result."

It was not so much being frustrated with a poor car that was the difficulty, more that Prost seemed incapable of sorting problems out: "It seemed like they were just not able to change some things."

2001 saw Nick move to Sauber and with a good car and a supportive team, the young German showed his worth. Seven points finishes, including a podium with third in Brazil, saw Nick eighth over all in the Driver's Championship and he and then-team mate Kimi Raikkonen gave Sauber its best ever finish of fourth in the Constructors.

Such a good year after the dismal time at Prost obviously gave Nick a boost: "Yes," he agreed with a smile. "It was really nice with Sauber to see a team that was a lot more organized and also the results were there. My third place and podium, which was great, and yeah," he smiled again and concluded with what must have been a large understatement: "It was quite nice."

In 2002 Sauber was beaten into fifth in the Constructors' standings by the newly revitalized Renault team. Although Sauber started well, and the car was undoubtedly fast in qualifying, the performance didn't carry through to the races.

"I think in the beginning (of 2002) we were even stronger than we were the year before, especially in qualifying," Nick recalled. "But we struggled in the race. We were quite unlucky sometimes because there were a few races when I was in a good position but had some problems with the car and couldn't finish. Then we went backwards, then the car was ok...it was not so nice...Then we went into a problem mid to end of season where we just had a lot of problems compared to the others." 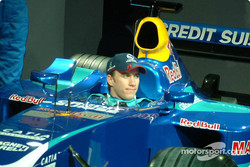 Nick Heidfeld.
Photo by Nikki Reynolds.
So were there any specific reasons, any areas that caused the difficulties? "It's never nice to have not such a good performance," he mused. "There were a couple of things coming together but the other teams probably moved forward a bit more than we did."

"There were one or two races that we were not so comfortable with the tyres, whereas before..." Again, a contemplative pause as he tried to explain. "I never understood why some teams complained about tyres. Obviously ours fit Ferrari but we at Sauber never had a problem. Then mid to end of season we suddenly did have a problem and I think that didn't help."

Evidently it was not a problem that could be explained easily to someone has no experience of driving an F1 car and the difficulties of tyre wear. Fair enough; I was not about to pretend I would understand the idiosyncrasies of tyre behavior any more than my very basic knowledge, and presumably Nick wasn't about to give away any possible Bridgestone weaknesses.

While Ferrari is Bridgestone's number one concern, it would naturally be more advantageous for Sauber to develop its own tyres. However, the always-present problem of money has to be considered: "It would be better if we could do it completely ourselves," Nick said of tyre development. "Which would be allowed from this year. But it's not possible, I think it would be too expensive and F1 is supposed to be cutting costs not increasing them."

So how has the C22 been improved from last year's car? "Right now, we improve on all parts; the aerodynamics are better, the car is lighter, the centre of gravity is lower and more in the middle. The chassis is stronger, stiffer, the engine is more powerful, so we improve from the other car."

It was the only answer he gave that was rattled off almost subconsciously; no doubt he was asked the same question dozens of times during the day. However, seeing as the event was to launch the C22 I thought I should inquire -- but scrap that line of questioning, I went back to other topics.

The new car has been good, if not stellar, in winter testing and appears to be steadily improving. Many dismiss winter test times as irrelevant and although Nick thinks they are important, the times shouldn't be considered a way of judging one team against another.

"They mean something," he nodded -- the nay-sayers at least have a convenient excuse to justify slow times. "But it is important not to concentrate on other people's testing times because it doesn't help you. You have to try and improve your own car and analyze that (your own performance) very clearly." 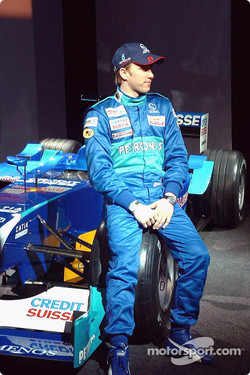 Nick Heidfeld.
Photo by Nikki Reynolds.
"On top of that, you never know what other teams are doing -- you don't know how much fuel they run and especially with two tyre suppliers, you don't know if they are testing any special tyres. So it's very difficult. Sometimes you get an idea but you can't really draw any conclusions."

Nick is maintaining his quiet confidence for 2003; he's looking forward to the new qualifying system, which he thinks will suit his style, and to scoring more points. He's realistically hopeful for a podium or two but not about to predict any surprises in the way of results. He neither tries to glamourize his talents or overestimate his chances; he simply knows his strengths and the team's and will put one hundred percent into maximizing both. Whether the C22 will live up to expectations remains to be seen but Nick's ability behind the wheel has already been proven.

"We are with Jordan and Minardi in being teams that don't have the backing of a manufacturer," he said. "So it will be hard to compete with the top teams on a technical level and win back the fourth place, but I think we are capable of it. I will work as hard as I always have to get the best from myself and the team."

The Formula One driver is not the only racer in the Heidfeld family: younger brother Sven will compete in F3000 this year, the series in which Nick was champion in 1999: "I'm really happy about it," Nick said about his brother's forthcoming season. "Because it seems he was very strong from the beginning. He seems to have improved his driving style and I hope he's going to have something of a breakthrough this year."

So we have the Schumachers in F1 at the moment, will we have the Heidfeld brothers in the future, I speculated? Nick laughed, then grinning cheerfully he nodded: "I hope so!"

Nick was a pleasure to interview: he's articulate and interesting and is willing to talk rather than just give a brief answer. He doesn't shuffle, look bored or pissed off and maintains a steady eye contact which is reassuring rather than intimidating. He's a stark contrast to some drivers I have met, who gave the impression they'd rather be anywhere but being interviewed.

Sauber should be fighting forward again this year, rather than struggling for performance, which will give the team the opportunity to retake fourth place in the Constructors' standings. With a good car, Nick has every chance to play his part in getting Sauber the result it wants. That quiet confidence is very hard to doubt.

The life of Michael Gagliardo