"I really like the idea (of an orange livery)," -Martin Whitmarsh

With Honda arriving in 2015, the long Mercedes partnership entering the final straight and title sponsor Vodafone now departed, it had been rumoured the Woking based team could revert to its traditional colours.

"I really like the idea (of an orange livery)," Martin Whitmarsh, whose position as team boss is in serious doubt following Ron Dennis' return, said last year.

"If we're lucky enough to find a sponsor who likes orange, you could see that colour again in Formula One," Whitmarsh had said in 2013.

But Omnicorse claims the MP4-29 will in fact retain the chrome finish of past seasons, given that it is not clear a new title sponsor has been signed.

That would leave the door open for a full change of identity for the new Honda era in 2015.

Whitmarsh's proposal for orange, therefore, might have been dismissed by the newly all-powerful and famously meticulous Dennis. 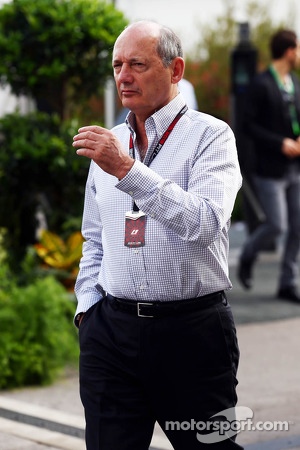 Reports say his 20-minute speech to McLaren staff last week, just before it was announced publicly that he is replacing Whitmarsh as chief executive, was followed by a standing ovation.

Dennis, 66, had promised "changes", and after the disastrous 2013 season, that was welcomed by team staff.

Former team driver and long-time F1 pundit John Watson, however, warned that it should not be expected that Dennis' return will lead to immediate success.

"They were subjugated by Ferrari at the turn of the century, then for two years by Renault, four seasons by Sebastian Vettel and Red Bull and Mercedes are now looking very strong for 2014," he wrote in the Daily Mail.

"It is a difficult route to get back to the top, and it won't be a walk in the park just because Ron is coming back.

"It will be a building process, and that process in part is going to start with this new engine formula and working towards 2015 with Honda and then beyond," he added.