The Austrian Grand Prix in 2002 will probably be best remembered as the scene of Ferrari's team orders faux pas, when, to the disgust of the fans, Rubens Barrichello moved over for Michael Schumacher on the very last lap. Schumacher recalls it as a ...

The Austrian Grand Prix in 2002 will probably be best remembered as the scene of Ferrari's team orders faux pas, when, to the disgust of the fans, Rubens Barrichello moved over for Michael Schumacher on the very last lap. Schumacher recalls it as a 'difficult' situation but is hoping to close the gap to championship leaders McLaren this time around. 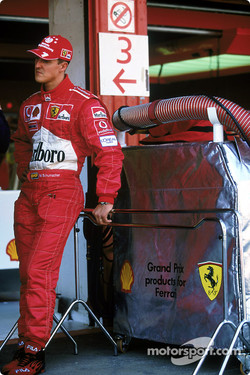 Michael Schumacher.
Photo by Shell Motorsport.
"After two strong races for us, I am impatient to tackle the next grand prix, which will give us a chance to close up the gap in the world championship," he said. "Last year, the Austrian event was difficult for us, but it is not worth making any comparisons with today, as the current situation is very different."

It looks like 2003 will be the last GP at the A1-Ring, due to the ban on tobacco advertising and Schumacher, like many other drivers, will be sad to see it go: "It is also the last Austrian Grand Prix, which is a shame, especially as I always enjoy the fantastic countryside at this circuit."

The circuit has not been a lucky one for the German, despite claiming the dubious victory last year, but Schumacher denies that he dislikes it: "People like to think I don't like this track very much, but that's not true," he commented.

"It's just that things have never gone perfectly for me at Zeltweg. The track layout is not the most difficult nor the quickest, but it is definitely interesting, especially as it offers good overtaking opportunities."

As for this year's race, Schumacher is confident the F2003-GA will deliver what's expected of it. "From a technical viewpoint, the A1-Ring demands a lot of the brakes and front tyres and you need a well balanced car not to ruin the tyres," he explained.

"As far as that is concerned, our car is a big help, because it has no real weak points. The way the F2003-GA is shaping up, we can have high hopes for Austria."

Hills to climb in Austria