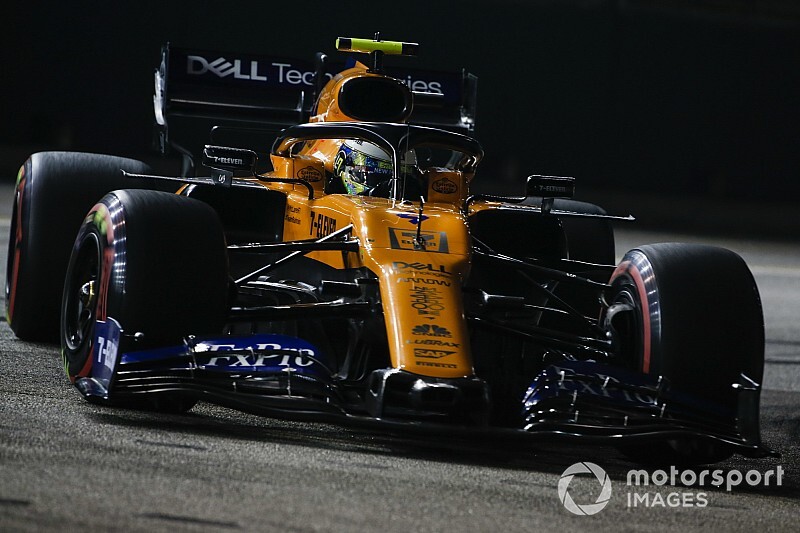 McLaren Formula 1 driver Lando Norris says "brain fade" on his final run in Singapore Grand Prix qualifying resulted in an "awful" lap that left him 10th on the grid.

Norris had been seventh after the opening runs in the final stage of qualifying at the Marina Bay track – and had finished sixth in both Q1 and Q2 – before he was shuffled down the order by Renault pair Daniel Ricciardo and Nico Hulkenberg.

The 19-year-old said that a compromised warm-up lap ahead of his final run cost him confidence and he then went on to make a mistake at the Turn 13 hairpin.

"It was a good feeling I had – Q1 went well, Q2 went very well, I did a really nice lap," Norris told Sky F1. "I was happy, confident – we didn't change anything in the car, really.

"[But] I went out for my final run and I didn't quite get the warm-up I wanted to do with these tyres and I was maybe a bit close to the car ahead.

"I just didn't have the confidence because of these two factors to push and be on the limit as much as I was in Q2.

"Then I had some brain fade in the middle [sector] – wrong gears and so on. So it just went very wrong and I lost time trying to make up for it – because I'm an idiot. And I just lost out even more.

"It was going very well – I think I can be happy with Q1 and Q2. But the one that counts I'm not very happy with. It was just silly mistakes, basically.

"Until halfway around the lap I was pretty even with my Q2 lap and then I made one mistake – quite a big mistake, which I've probably never made ever before."

When asked what he had done wrong, Norris explained that he "just did the wrong gear in the hairpin".

"Just didn't downshift as many gears as I should have done," he continued. "So I lost the rear and had a bad exit [and] wheelspin.

"I just tried to make up for it, [but] I had a bit too much temperature in the rears and then it was just a spiralling effect all the way to the end.

"As much as it was an awful lap – my lap in Q2 was nice [and] the confidence is there to know that I can do it.

"So I'm very happy with that, but I just didn't do it when I wanted to do it."