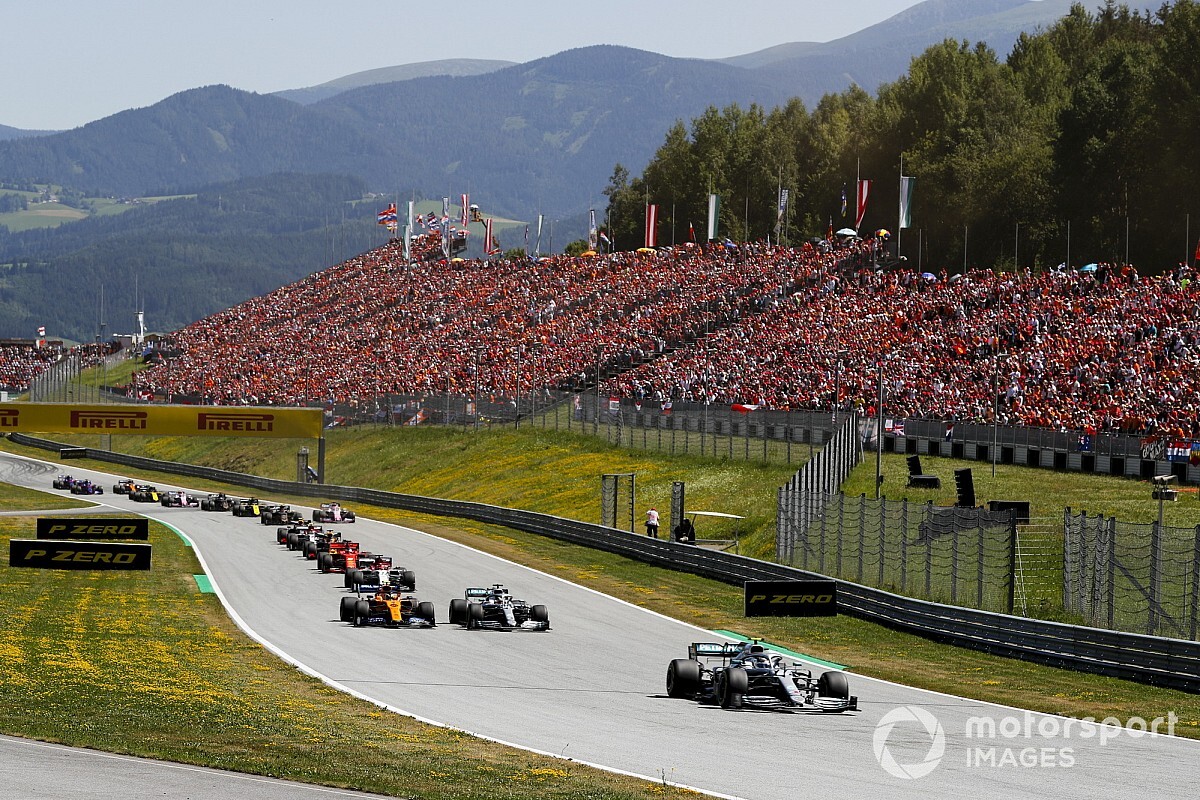 Lando Norris says he knew he could take more risks than Lewis Hamilton when he went around the outside of the world champion at the first corner of the Austrian Grand Prix.

After lining up fifth on the grid, Norris moved up one place at the start after Max Verstappen nearly stalled, and then he muscled his way up to third when he went around the outside of Hamilton's Mercedes at the opening corner.

"The first lap was the best bit, I think!" said Norris, who eventually went on to finish sixth. "We've been good on starts as a team, I've just done a couple of mistakes in the past couple of races but in Paul Ricard I did a decent job, not quite good enough, but this weekend I got a good start.

"I got around Turn 1 thinking 'do I run off, do I not', but yeah I had faith in Lewis that he wouldn't do anything silly. The situation he's in I can take more risk than he can. So had a go around the outside of him heading into turn 1, which still wasn't easy."

Norris slipped back behind Hamilton and Kimi Raikkonen later in the lap, but was able to then repass the Finn before bringing home more important points for his McLaren team.

"It was a shame I couldn't stay ahead of Lewis, because he was quick on the straights, which was a bit frustrating. But apart from that we did a better job on the opening lap which was nice.

"After that it was more controlling the race, getting past the Alfa, because we know and we're confident that we had good pace, just managing the tyres and trying to make it to the end.

"I know there's more time, more result to come from me than in the first few corners. It's about getting to the end, learning about how to manage the battery and manage the tyres and so on.

"There's more of a gain doing that than trying to get one position in Turn 1 and risking doing something stupid. I think I dropped further back than what I wanted to, but I took the safe option for a good reason. If I want to push, and I need to, I can go forward."

Norris also believed that battling eventual race winner Verstappen later in the race, as the Dutchman began to recover his lost places, was important for helping his team understand its strengths and weaknesses.

"Max struggled to get past me initially, but obviously he went on to win so you can see the pace in the car that they had was a big advantage," he said. "But it still wasn't easy for him to get past on the opening laps.

"It was nice to race them, you can see where they're gaining, and where they're maybe not far away in terms of our pace compared to theirs.

"It was a brief spell competing against guys who are quicker than us, but that's where we want to be eventually, so if we keep working hard we'll see if one day we'll be fighting them off."

Verstappen verdict was not for F1's benefit - Masi