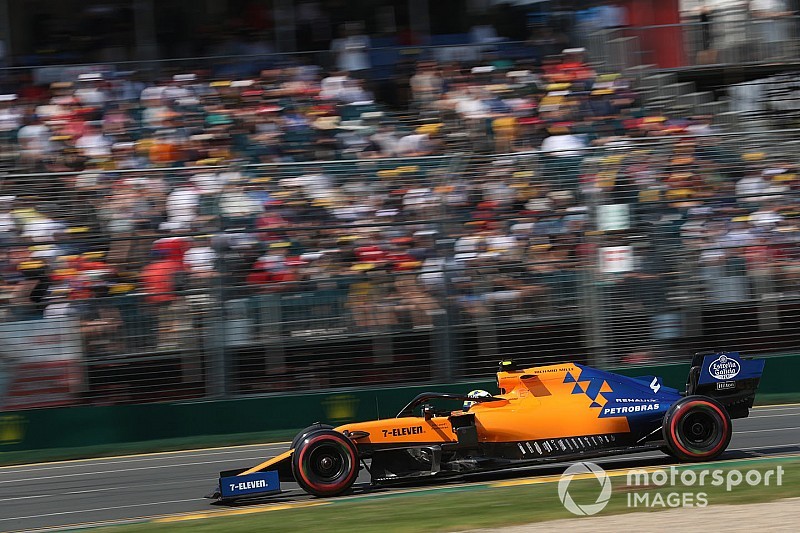 McLaren's Formula 1 rookie Lando Norris is wary of repeating his top-10 qualifying heroics from the season-opening Australian Grand Prix, but hopes the team is more competitive than it thought.

Norris qualified eighth for his grand prix debut and while he was unable to finish in the points in the Melbourne race he and McLaren were buoyed by a stronger showing than expected.

The Formula 2 graduate has admitted it does not mean McLaren can expect top-10 starts at every race, but also believes a dip in qualifying performance would be no cause for alarm either.

"It's not a guarantee that we're going to be in Q3 every time, so I don't think everybody needs to get their hopes up, or expect us to be in Q3 from now on," said Norris.

"Obviously it's what we would like to do and it's our aim.

"But if we go into the next one and we happen to, for whatever reason, not be in Q2, I don't think it [progressing to Q3] is something everybody needs to not expect [in future races].

"Hopefully this kind of shows we're in a better position that we thought."

Norris's teammate Carlos Sainz was knocked out in Q1 because he approached the hobbled Williams of Robert Kubica on his final run.

However, until that point Sainz had also been encouraged by McLaren's pace.

"The team ended last year far from the midfield, like three or four tenths I would say," he said.

"It looks like we put ourselves back in the mix after the winter, which shows the incredible job that the factory and the team has done over winter testing.

"After Barcelona we were not so sure that Q3 was possible.

"It doesn't mean we're going to be in Q3 in Bahrain and China, but it means we've got ourselves back in the mix and it's now a matter of nailing laps, nailing procedures, nailing the set-up for each track because the midfield is as tight as always."

However, part of the reason McLaren's Melbourne performance was above-expectation this year is that Norris did not think the track would suit the MCL34.

Like Sainz, he believes track characteristics will play a major part in the midfield battle.

"It's going to vary track to track, I can't say no but I can't say definitely yes," he said after Melbourne qualifying, when asked if Q3 was representative of McLaren's pace.

"One small mistake can make a difference, but I managed to do a lap that put me in the front side of that group.

"I can't say yes or no, but it's more than we thought and I hope that's a similar case at other tracks."

Gasly: F1 tyres "not easy" thanks to new blanket limits