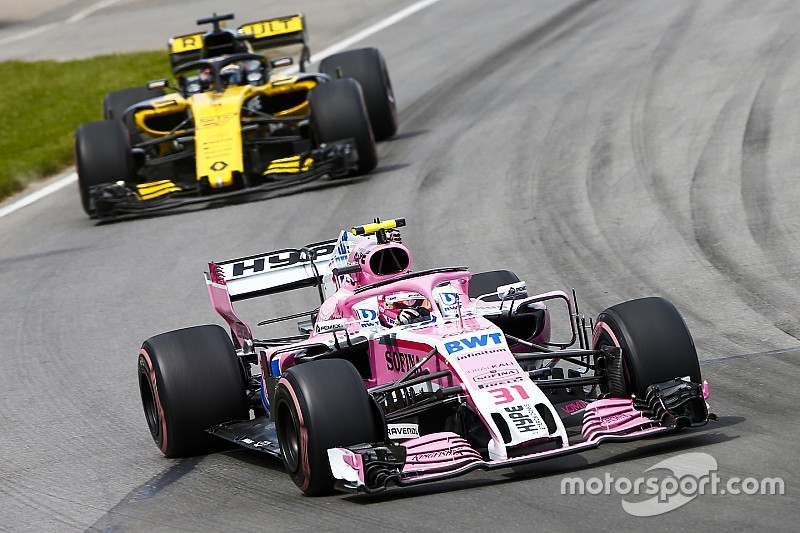 Ocon, who has been affiliated with the Silver Arrows since 2014, has impressed in F1 with Mercedes client Force India for the past year and a half – but will not be called up to the manufacturers' factory team next year, as it has already re-signed Lewis Hamilton and Valtteri Bottas.

The Frenchman is now thought likely to remain on loan from Mercedes but switch from Force India to Renault for 2019, having been a Renault reserve and a junior driver for its predecessor team Lotus in the past.

Mercedes is thought to be keen as such a move would give Ocon experience of a works operation and would potentially offer him a more competitive package.

Ocon's chances of staying at Force India for a third season are thought to be low as the team has been linked to investment from Lawrence Stroll, the father of current Williams driver Lance, which would impact seat availability.

Asked ahead of the Hungarian Grand Prix whether Mercedes would be open to letting Ocon drive an F1 car not powered by its engine, Wolff said the manufacturer "wouldn't want to stand in the way".

"We picked Esteban up when Gravity fell apart and the first time he was actually associated with was Renault," Mercedes F1 boss Wolff recalled. "We at the time had just started our junior programme and it felt right to put Pascal [Wehrlein] and Esteban to give them a go.

"Today we are trying to set them a path that will make them very successful long-term, to put them in a position to be world champions maybe one day.

"With Valtteri and Lewis we have a line-up that is stable, that works for us, and at this stage there is no opportunity within Mercedes.

"If he has the opportunity somewhere else to be successful as a racing driver, and another team or another constructors to be successful with Esteban, we wouldn't want to stand in the way."

Force India said earlier this month that it would "consider" offers from rival teams for Ocon, who is contractually bound to the team for next year.

Speaking in the same Friday press conference as Wolff, Force India's Chief Operating Officer Otmar Szafnauer said of Ocon: "I'm glad there's interest, he's a great driver. I'm glad we chose him a couple of years ago and helped him progress to the point where others are interested.

"He's got a contract with us so for him to go elsewhere we'd have to agree to that."

Szafnauer reiterated that the team was open to allowing the Frenchman to leave, provided the arrangement was "mutually beneficial".

"It's fine for him to go but we've got to agree to that. And I'm sure Toto has persuasive tools if that's what we all want to do. If it's mutual.

"We work well together, we had great discussions about Esteban when he came in. If it's mutually beneficial, then of course that's what we're going to do. We won't stand in his way."

Ricciardo on older Renault spec than Verstappen after failure