Other drivers got away with worse at Monza - Verstappen

Max Verstappen is even more convinced that he was treated unfairly with his Italian Grand Prix penalty, after claiming other drivers got away with much worse behaviour at Monza. 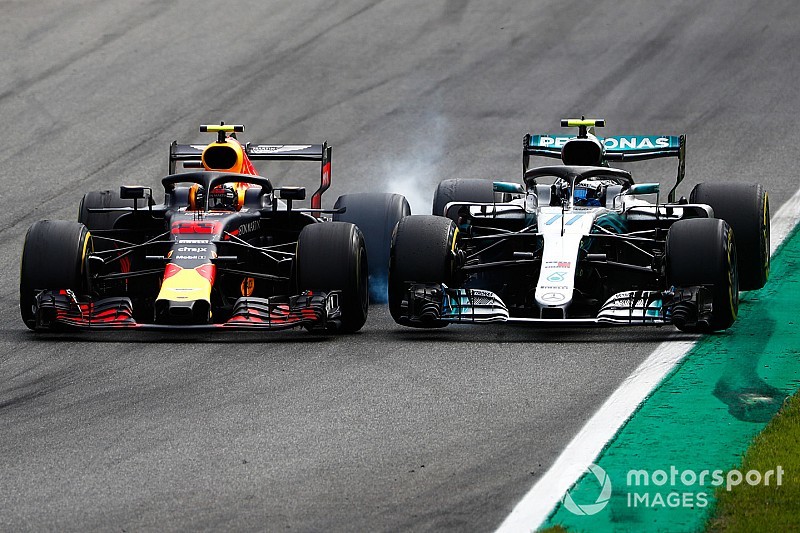 The Red Bull driver was handed a five-second penalty after colliding with Valtteri Bottas as they battled for third place in the closing stages of the race. The punishment eventually dropped him to fifth.

Having expressed anger over the team radio at the time about the sanction, Verstappen says his belief that he should not have been punished has been hardened after seeing videos of what others drivers did.

He says that a similar incident between Felipe Massa and Lance Stroll at Monza last year showed that his defensive driving was not out of the ordinary, plus he does not understand why a spate of collisions elsewhere were not subject to similar scrutiny.

"I was analysing other videos from the year before, because when you go back 10/15 years it is a bit irrelevant with rules and stuff, and the same happened exactly between Stroll and Massa [in 2017]," said Verstappen, when asked by Motorsport.com about the Monza incident.

"Of course I always try to make it as difficult as possible for them to get by. And I will fight for every millimetre on track, which I did, so at the end I think it is very harsh.

"Also looking back at what happened in Monza, other drivers just pushing each other off the track, damaging each other's cars, running into each other, and we didn't have any damage. He clipped my wheel and had to go wide.

"There was no damage and I think that is why it was very hard. You cannot change the decision, but I still think it was harsh."

Verstappen accepts he was moving across on Bottas to defend, but remains adamant that the Finn had enough room to avoid a collision.

"Of course I was going to the left but as long as you give him a car width space then it is fine," he said.

Although Verstappen has been involved in a number of controversial incidents when defending positions, he says that situations have been exacerbated by him always having to defend against more powerful cars.

"Of course I have to defend this hard because I am always down on power on the straight. If we have the top speed you will never be in this position.

"With the clipping we have, it is more than the others, so they suddenly arrive very quick and you have to be very aggressive in your defending.

"I could also easily just say, let him go by and still have a great race and everybody says Max had an amazing race. But I am not there to finish fourth."