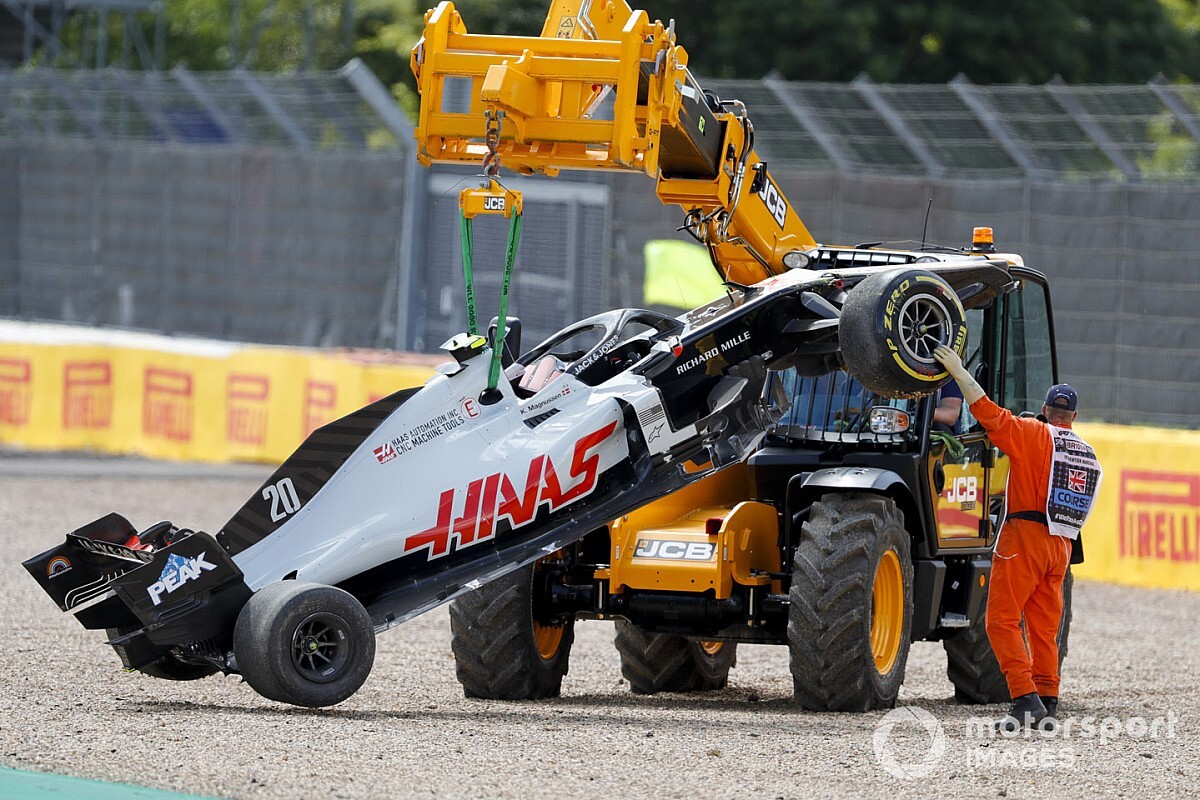 Haas boss Gunther Steiner says F1's penalty system "is not working right" after Alex Albon received a five-second sanction for his collision with Kevin Magnussen in the British GP.

The incident saw Magnussen retire with a badly damaged car, and Steiner contrasted Albon's penalty with the 10 seconds added to the race times of the two Haas drivers in Hungary.

Magnussen and Romain Grosjean both pitted for dry tyres before the start in Budapest, following a discussion with their engineers.

However, after the race both received penalties having fallen foul of a 2017 technical directive that was designed to stop pre-race radio chatter on the formation lap about clutch bite points and any other form of 'coaching' from the pit wall.

"The penalty system is not working right," said Steiner. "In Hungary, we came into the pits before the race and penalised ourselves, because we decided to start from pitlane, and we get 10 seconds.

"Here we get taken out on the first lap. Obviously it was his [Albon's] fault, because he got a penalty, but it was five seconds, and we were out of the race.

"In Hungary, we didn't damage anybody, and we didn't get an advantage really because we penalised ourselves by starting from pitlane.

"We talked with the drivers, in the circumstances, it's very unclear in the regulations. It's from 2017, I think we need to look into getting that a little more closed up, the punishment doesn't fit the crime all the time.

"It seems always that I complain about it, but I think there are situations where we are just more exposed to these things."

Steiner noted that Budapest penalties were particularly frustrating as the team was given no warning by the FIA during the race.

"Obviously we are speaking with them about it, because I think it was not in the interest of F1 to give a penalty like this, that's the biggest point we have got," he said.

"We were not advised during the race that there could be an investigation, that's what normally happens – if it comes up, 'investigate', you can plan for it. But it was done one and a half hours afterwards.

"So there were a few miss-steps that led to that penalty. At some stage the FIA will clarify this, hopefully, because how I see it there is not a rule in place.

"There is a TD from 2017, which clarifies something you cannot do, giving advice to a driver for the clutch and things like this, but changing tyres isn't in there.

"It's quite a grey area, and in my opinion if it is grey, the first time you shouldn't get a penalty, you should get a reprimand, and then [they should say] we clarify this rule and at the next race you've got a rule, and not a TD.

"It's an ambiguous decision that was taken, and we are waiting for clarification from the FIA."