McLaren has decided to replace 23-year-old Perez, who only joined the team from Sauber at the end of last year, with its development rookie Kevin Magnussen.

Nov.14 (GMM) After accusing McLaren of lacking "organisation and humility" in 2013, Sergio Perez has announced he is leaving the British team.

But, in a statement posted via Twitter, the Mexican driver toned down his criticism and insisted he doesn't regret having joined McLaren "even a bit".

It emerged early this week that McLaren has decided to replace 23-year-old Perez, who only joined the team from Sauber at the end of last year, with its development rookie Kevin Magnussen.

"I have always given the best of me for the team," Perez wrote in his statement posted in Spanish and English, "and still despite this I could not achieve what I aimed for in this historic team." 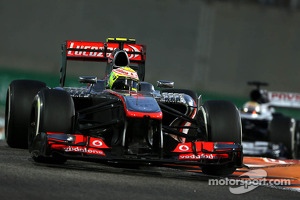 He described losing his McLaren seat as a "difficult moment", but said 2013 was a "learning experience" and he vowed to keep racing in 2014.

"I will always be a fan of McLaren," said Perez. "In the meanwhile I will be looking at my future to ensure my position in the best possible package to fight for wins."

Backed by the billionaire Carlos Slim-linked Telmex, Perez is now being linked with a move to Lotus, Force India, or a less likely return to Sauber.

"We wish him well for the future, and are sure that he will have many successes ahead of him," he said.

It is believed official confirmation of Perez's successor, Magnussen, is imminent.

"Kevin is so good and clever," Danish F1 journalist Peter Nygaard said, "I think he could even beat Jenson Button."

Magnussen and his father Jan, who raced in F1 for McLaren and Stewart, join F1's other sons-and-fathers including Damon and Graham Hill, Jacques and Gilles Villeneuve and Nico and Keke Rosberg.

"McLaren are taking a risk in having a new Hamilton," wrote Sportwoche chief editor Gerard Enzinger, "and if he fails, he will be spat out, just like Sergio Perez."