"He is very quick, has good pace and he proved that all weekend in India" - Jenson Button

Amid wild rumours linking Ferrari's Fernando Alonso with a return to the British team, McLaren is yet to confirm 23-year-old Mexican Perez's seat for 2014.

Sporting director Sam Michael said in a teleconference on Thursday: "Checo's pushing very hard at the moment, staying focused, he's driving well, working well with the engineers and ultimately that's what we expect him to do."

McLaren has said sticking with Button and Perez for next season - the famous team's last with Mercedes power before switching to Honda - is the most likely scenario. 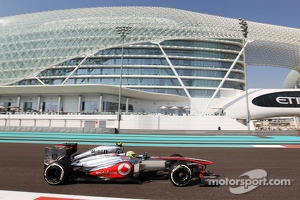 "He deserves to be here next year," Briton Button is quoted by F1's official website.

"He is very quick, has good pace and he proved that all weekend in India.

"For the whole team it was a very promising weekend, even more so for Checo and his future in the team."

Indeed, Perez's fifth place finish in India was his best result of the season, but the Mexican denies it has guaranteed his place for 2014.

"I don't think so, because in a team like McLaren, decisions are not made on the basis of one race," he is quoted by f1news.ru.

Perez said any questions about his future should be directed to team boss Martin Whitmarsh.