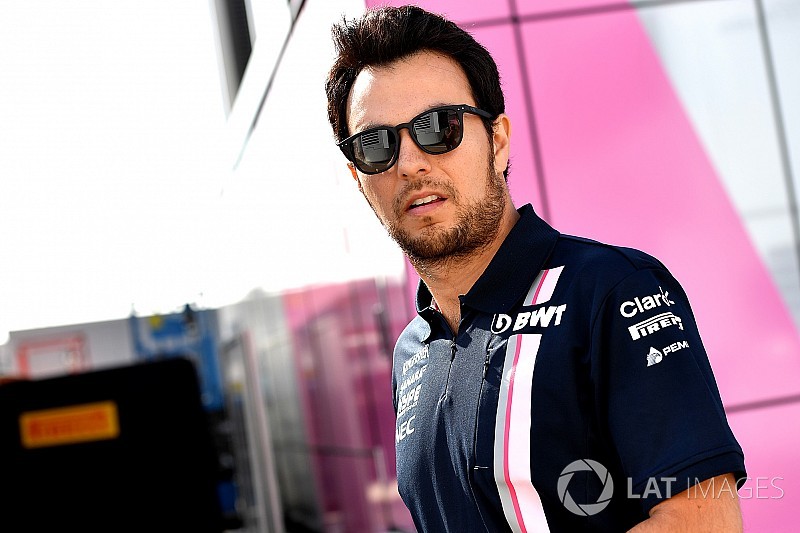 Sergio Perez says the "critical" financial situation at Force India, and how it will be resolved, will play a part in his decision over the immediate future of his Formula 1 career.

Perez is known to be in the frame elsewhere, notably at Haas, where he has been mentioned as a possible replacement for Romain Grosjean.

While the Mexican still sees staying at Force India as one of his main options, the financial squeeze that has slowed development, amid rumours about new investors or owners, has created some uncertainty.

“At the moment the situation is critical,” Perez said. “There’s no secret that the financial problems have held the team back quite a bit.

"If you look at the results, because F1 is just about results, we are fifth in the constructors’ championship, and you can not imagine the financial issues that we’ve had so far. It just shows the potential this team has.

“Definitely, I would like to see what happens in the coming weeks and months, what happens with the team, because I believe it is a great team.

"I’m not in a hurry because I know I’m in a great position, but the sooner the better.”

Pressed by Motorsport.com on whether he might be unable to wait too long for confirmation of any changes to the team’s ownership, Perez said: “Yeah, there is also a point on how long you can wait to make up your mind, you know.

"I think now during the summer break I will have a good idea what’s happening here, and then I will be able to make a clear decision.”

Force India Chief Operating Officer Otmar Szafnauer said this week that negotiations with Perez’s sponsors usually take place around the Mexican GP, but Perez himself acknowledged that things could happen before that.

“That’s a long way from now, we all know that. But it won’t be long before we know where we stand.”

Perez says he is looking at other options for 2019, while hinting that Force India could still provide him with the best opportunity.

“I’m lucky enough to have a couple of options. Obviously we all want to be driving in the top two teams, Ferrari or Mercedes, so obviously it’s very unlikely that I’ll have an opportunity there for the next years. So you have to look at where is the best option for your future, where you can show your talent.

“I’ve been for the last two years the best of the rest in the drivers’ championship. I just want to see what’s possible for next year, which teams have a vacancy, and then decide.

"Like I say, I will definitely wait to see what happens here because I believe this team has the most potential of anyone out[side] of the top three teams.”

Intriguingly, Perez suggested that there could be fewer moves in the driver market than paddock observers are expecting.

“Probably this time we see a lot of moving around in the media about the driving market, but things are a lot more quiet, and I think probably there will be less movement than expected. So, not so much going on this year.”

Why Ricciardo should put his faith in Honda

Consistency "the magic word" for Grosjean's future at Haas