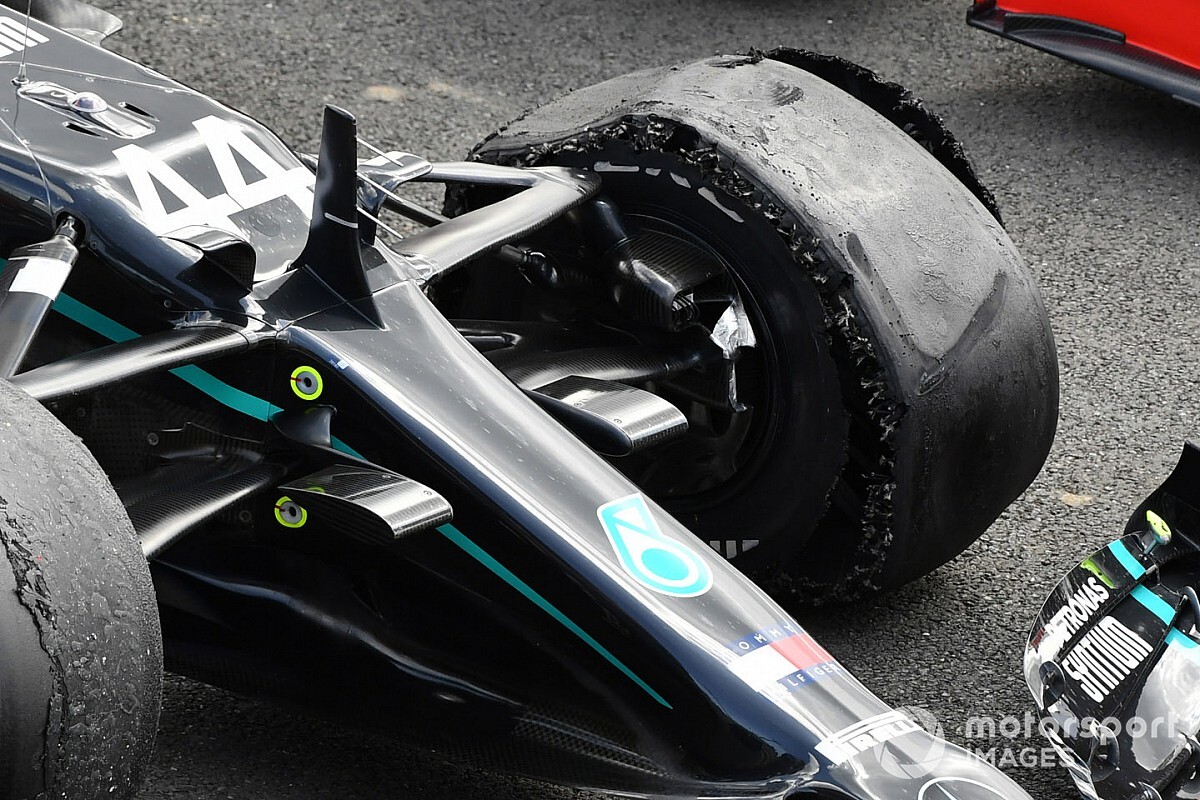 Pirelli has concluded the British Grand Prix tyre failures resulted from the unusually long stints that were run on the hard compound during the race.

The Italian company also said that the high-downforce loadings produced by the 2020 cars represent the "biggest forces ever seen on tyres" in F1 history.

Lewis Hamilton, Valtteri Bottas and Carlos Sainz suffered front left failures in the closing laps of the race, with only winner Hamilton making it home without losing a position.

Bottas and Sainz dropped out of the points after their last-minute stops.

Pirelli's investigation indicated that the unexpectedly long second stints triggered by the safety car that came out when Daniil Kvyat crashed – co-incidentally because of a right rear puncture – led to the late failures.

"The key reason is down to a set of individual race circumstances that led to an extremely long use of the second set of tyres," said Pirelli in a statement.

"The second safety car period prompted nearly all the teams to anticipate their planned pit stop and so carry out a particularly long final stint: around 40 laps, which is more than three-quarters the total race length on one of the most demanding tracks of the calendar.

"Combined with the notably increased pace of the 2020 Formula 1 cars (pole position was 1.2 seconds faster compared to 2019) this made the final laps of the British Grand Prix especially tough, as a consequence of the biggest forces ever seen on tyres generated by the fastest Formula 1 cars in history.

"The overall result was the most challenging operating conditions for tyres. These led to the front-left tyre (which is well-known for working hardest at Silverstone) being placed under maximum stress after a very high number of laps, with the resulting high wear meaning that it was less protected from the extreme forces in play."

Pirelli will stick with its original plan to go one step softer for this weekend's 70th Anniversary GP at Silverstone, with the C2, C3 and C4 in use, without the hardest C1 compound.

However, it is likely to mandate higher minimum pressures as a safety precaution.

There was no mention of debris as a contributing factor, despite speculation that Kimi Raikkonen's late front wing failure could have played a role.