May 2 (GMM) An obvious tension was evident at Mugello when Pirelli's Paul Hembery was asked about Michael Schumacher. 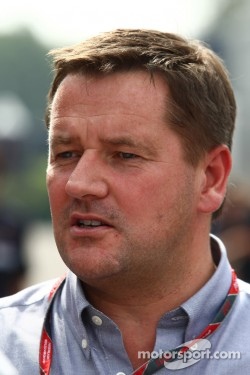 The seven time world champion had slammed F1's official supplier after Bahrain, arguing that the 2012 tyres degrade so quickly it makes driving a Grand Prix car as slow as a safety car.

"We haven't spoken," Briton Hembery is quoted by Germany's Auto Motor und Sport. "I've just read something on the net about the tyres from his teammate Nico Rosberg which is very different."

Asked if Schumacher's criticism was irritating, he answered: "We built the tyres the way we were asked to.

"The FIA, Bernie Ecclestone, even the teams wanted it this way. The spokesman for the teams at the time was Ross Brawn, Schumacher's team boss.

"There have been four different winners in the four races so far, which alone shows that we must have done something right," Hembery insisted. "As a fan I would be thrilled."

Asked if he can at least understand Schumacher's frustration, he continued: "The four winners this year have not won by chance.

"They were absolutely the best drivers in those races and all of them were faster than their teammates.

"I can understand that Michael was frustrated at the last race. Among the four winners so far were two Germans, and then you had Kimi (Raikkonen), who in the fourth race of his comeback is on the podium.

"Racers are winners; they're not happy unless they're winning."

Hembery denied that tyres have, in 2012, become more important than the cars or drivers.

"That's a misconception," he insisted. "The driver has a huge impact.

"Anyway I'm convinced that at Silverstone at the latest the teams will have the problem under control. Just as they did last year."

Finally, he insisted that Pirelli is not going to make any knee-jerk reactions.

"If there are 23 drivers satisfied and only one dissatisfied, then I don't think we need to change something," Hembery is quoted by Bild newspaper.

"For the top teams it's a bit frustrating," he told La Stampa newspaper, "when it's difficult to exploit all your potential.

"It's like Real Madrid, Barcelona and AC Milan suddenly playing with the budget of Cesena."