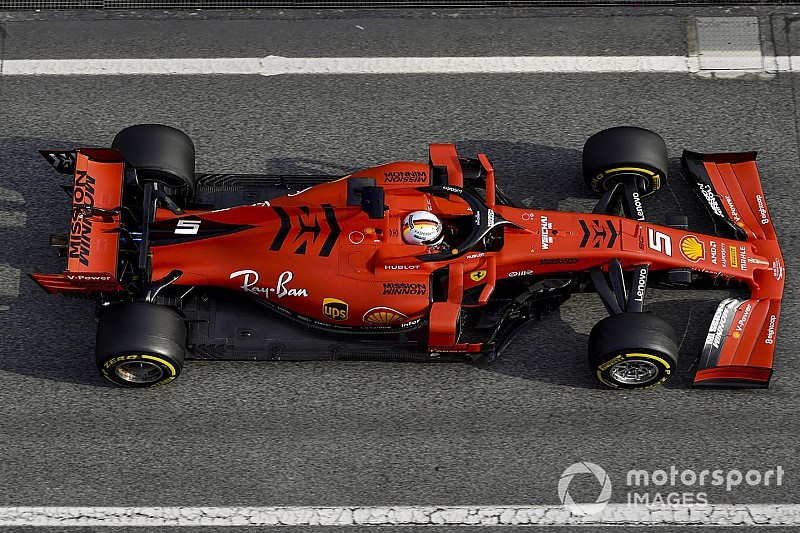 Pirelli’s estimated differences between its 2019 Formula 1 tyres suggest Ferrari ended the first test with an advantage of half a second.

The top three teams at the end of the opening week at Barcelona were Renault, Toro Rosso and Alfa Romeo, with Mercedes the best of the traditional benchmarks in fourth.

Ferrari was only fifth, 0.7s behind pacesetter Nico Hulkenberg, but Leclerc’s best time was set on the middle of Pirelli’s five compounds.

The top six drivers, including Mercedes’ Valtteri Bottas, used the softest of the five compounds – which Pirelli estimates is 1.2s faster than the C3 used by the Ferraris to set their best times.

Applying Pirelli’s estimates of the gaps to the C5 tyre reshuffles the top 10 laptimes from testing considerably.

Leclerc and Sebastian Vettel move to the head of the order as the only drivers with sub-1m17s laptimes.

There are more significant factors beyond the tyre compound that influence a laptime in testing, including engine modes and fuel levels.

Fuel is particularly tricky to account for, even though it is tempting to declare that, for example, Daniil Kvyat setting a 1m17.704s on one-lap outing must be a glory run on low fuel compared to Kimi Raikkonen setting an almost-identical 1m17.762s in a five-lap run.

Correcting the best laptimes from the opening test as if everybody had used C5 tyres is simplistic, and does not produce a definitive picture of the competitive order.

However, it is theoretically the most reliable way to account for one of the variables at play.

It serves to highlight just how misleading this week’s headline times were, as just changing one element of testing can completely transform the leaderboard.

A tyre-‘corrected’ leaderboard also tallies with all the other available data and assessments that Ferrari holds an advantage.

The competitive picture will change in week two when teams begin to show more performance.

Leclerc said Ferrari was holding back this week and that its rivals were also sandbagging, while Red Bull evidently not chasing laptimes. That means the order will become clearer in week two.

In the meantime, though, Pirelli’s data helps remove one of the many layers that make the picture so opaque – and further hints at Ferrari holding an advantage, whatever it may prove to be when it matters.