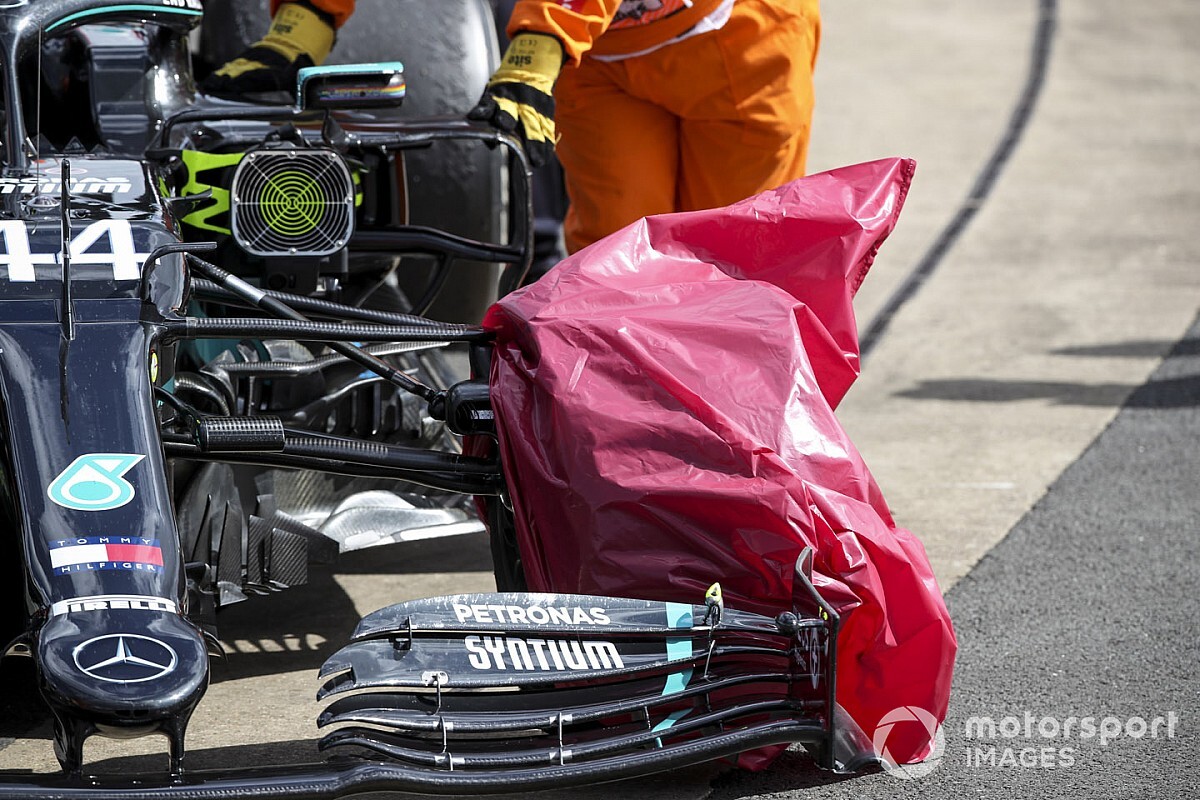 Pirelli Formula 1 boss Mario Isola says the Italian company will “analyse everything 360 degrees” after the spectacular series of tyre failures in the closing laps of the British GP.

Lewis Hamilton, Valtteri Bottas and Carlos Sainz all suffered similar-looking front-left tyre failures. Leader Hamilton’s occurred on the last lap, but the Mercedes driver managed to get his car safely home to claim victory, but Sainz and Bottas both tumbled out of the points after being forced to pit.

Isola says the cause of the failures is not yet clear, although he suggested that debris on track could have played a role. Kimi Raikkonen suffered front wing damage in the closing laps.

Drivers ran much longer stints than expected on the hard tyre, as the safety car for Daniil Kvyat’s accident led most of the field to pit on laps 12-13, with only Romain Grosjean staying out.

“We will obviously investigate what happened in the last few laps,” said Isola. “It's a bit early now to give you any conclusion. It could be high wear, because for sure tyres with 38 laps or more on this circuit are quite worn, but I'm not saying that the wear is the cause of the issue.

“It can be debris, because we had the pieces of the front wing of Kimi that were on track, but also some other debris. So that's why we want to investigate not only the tyres with a failure, but all the tyres used in the last few laps of the race, to understand if we find any other cut or any other possible indication on what happened.

“We don't want to exclude anything, we want to analyse everything 360 degrees and avoid excluding any possibility because it's a big mistake when you make these kinds of investigations. We have to consider all the possibilities.

“What we can do is to analyse the tyres from the race to understand if there is anything in the construction that was subject to excessive stress, or whatever, but this is one of the investigations.”

Isola stressed that high wear makes tyres more vulnerable: “The level of wear is quite high, this is a factor, looking at the tyre from Grosjean the first stint, it was completely worn, and I had a look at some tyres coming also from the second stint, and the level of wear is close to 100%.

“Then we have to understand If this is the cause of the failures or not. What is clear is that when you have a tyre that is completely worn the protection of the tread on the construction is less. So if there is any debris, any small piece of carbon on track, it is easier to damage the tyre, because you don't have any rubber on the tyre that is protecting the cord, and some cords are visible on the tyres. So that's why I'm saying that the level of wear is close to 100%.”

Isola conceded that with another race coming up at Silverstone next week it’s imperative that Pirelli comes up with answers. The initial research will be conducted onsite, with engineers immediately ‘bagging’ Hamilton’s tyre.

“We have the possibility to do some analysis in our laboratory here on track,” he said. “It is clear that we don't have a lot of time to carry on with the investigation, because we have another race in less than one week. So, we have to come to a conclusion as soon as possible. The target is to have something more fully by tomorrow, or Tuesday at the latest. So that is the plan.

“If there is the need to run any tests that are not possible to run here on track we will send the van quickly to Milan where we have our facilities, laboratories, indoor testing, with obviously more possibilities, more testing we can do there. But I'm confident that we can have some good indication from the laboratories that we have here on track.”

Pirelli is bringing softer compounds to next week’s race, but Isola downplayed any suggestion that the choice might have to change.

“There are a number of question marks at the moment and depending on which is the cause of the issue, we have to react appropriately,” he said.

“But the reaction can be different if we are talking about the wear, for example, it doesn't matter if we go with the same compounds we use today, or the softer compounds, each tyre has a maximum number of laps that depends on each car. Each car is different.”