Prost admits Renault “still not in a very stable situation”

Renault Formula 1 team non-executive director Alain Prost is confident the Enstone outfit can hang on to fifth place in the World Championship despite a “tough season”, during which he admits it has lacked stability. 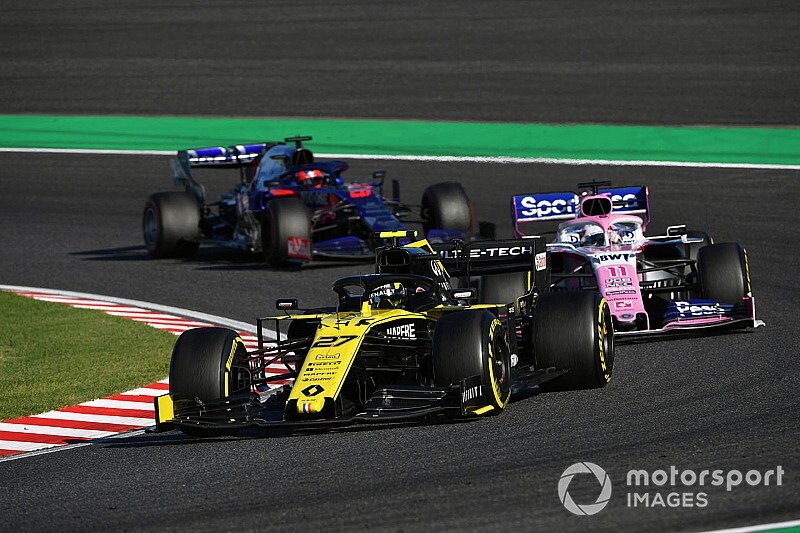 In recent weeks the focus has shifted from challenging McLaren for fourth place to securing fifth, in the face of a strong challenge from Racing Point and Scuderia Toro Rosso.

The team’s hopes took a big hit after Suzuka, when it lost sixth and 10th places after its brake balance system was deemed illegal as a driver aid.

In Austin Daniel Ricciardo earned “best of the rest” honours with sixth and Nico Hulkenberg took ninth, following another double score for the pair in Mexico the previous weekend.

Renault now has 83 points to the 65 of Racing Point and 64 of Toro Rosso with two rounds remaining.

“It’s not over but we are more confident for sure,” Prost told Motorsport.com. “After what happened when we lost the points in Japan – it makes quite a big difference, because it’s not only losing points, it gave more points to the others. So we really deserved to be where we are.

“At least at the end of the season we need to show something, because it’s good for the morale of the people. We have had a very tough season.

“We have been good most of the time for the second part of the season in races, but sometimes you have accidents at the first corner or whatever. With a little bit of luck we can fight more with McLaren.”

Prost admitted that it was taking longer than expected to rebuild the Enstone-based team, which Renault bought at the end of 2015.

“We know where we are, but it’s very different to explain outside. Because you’re trying to build something, sometimes you lose a bit. We are still not in a very stable situation because as you see we are changing the organisation.

“But we keep going. I’m not at all pessimistic for the future, but it takes a little bit more time to be there.”

Prost said that the team did a good job in Austin: “This race shows that sometimes how much difference you can have between qualifying and race conditions.

“We knew that without any incident we could beat the McLaren, we may have stayed out with Nico a little bit too long, but we thought that normally the one-stop would be good.

“You saw that for everybody it was maybe a surprise that we had to stop twice. That’s the only regret, but we were very pleased to have the two cars in the points.”

Ricciardo said is encouraged by the recent key staff recruitments announced by Renault as it shows that the management accepts that further change is needed in order to progress.

Last weekend Renault confirmed that former McLaren and Ferrari man Pat Fry is coming in 2020 in a senior technical role, while Dirk de Beer will be the new head of aero as part of a further reshuffle.

“When I came into the team there were still a few moving parts,” Ricciardo said when asked by Motorsport.com. “And I think this year for sure, it still hasn’t been perfect. So there’s still some moving parts going on to try and, I guess, tidy some areas up.

“So I guess with Pat coming in – I haven’t met him yet, I haven’t worked with him before or anything – he’s obviously got a lot of experience, so I’m looking forward to that.

“And I think more so just from what I see with the team in terms of them recognising there is still some, I guess places where we can be better, so the fact they are acting on that, I like that initiative from them.

“And we’ll see if it’s obviously, the right calls and decisions. But just taking kind of the courage to make change, I respect that.”

The "romantic” push for F1 cars to look more different