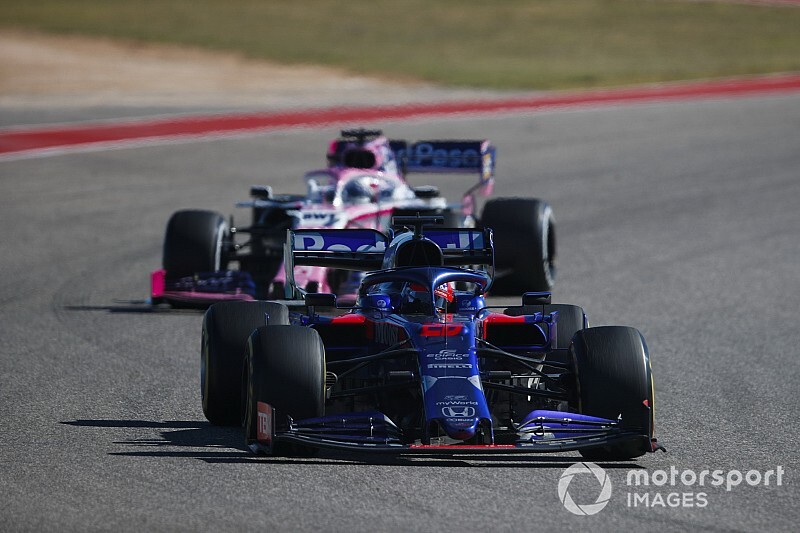 The penalty could have huge significance as it swapped 10th place in the race from Kvyat to Perez, and thus turned the initial one-point advantage for sixth place in the constructors’ championship for Toro Rosso into a one-point lead for Racing Point with two races to go.

The difference between sixth and seventh places in the constructors' standings in terms of the prize money distributed to the teams is around $5m.

Kvyat was penalised after he made contact with Perez while they battled for 10th on the final lap. Double-waved yellows prevented the Russian from trying at Turn 12, but having closed up on the Racing Point with the aid of DRS, he launched his attack at Turn 15.

“He deserved it,” Szafnauer told Motorsport.com.”You can’t make up all the time under double-waved yellows and not slow down, and then bounce off the kerbs into someone.

"I think justice prevailed. Without that Sergio would have held him off.

“If you look at the on-board, he just closes up under yellow. So without being able to close up you’ve only got a few turns left and you’re done.

FIA race director Michael Masi said that as with the similar last-lap incident Kvyat had with Nico Hulkenberg in Mexico, the decision to award a penalty was a straightforward one for the stewards, who had access to extra CCTV footage.

“It was fairly clear cut,” he said. “Obviously it being last lap we sent it straight through to them. Dany’s come up, bounced off the kerb on the inside, gone for the late braking manoeuvre, and contact resulted. The stewards had a look at it and made their determination.”

Szafnauer acknowledged that the battle for sixth with Toro Rosso is hotting up, especially given the financial implications.

“Two races left, so we’ll do all we can to try and catch up," he said. "You want to finish as high as you can, independent of the money. But the money absolutely does matter.

“We’ve got a fight on our hands there, and we’ve got to maximise our points in the next two races. Anything can happen, but we’ll work hard.”