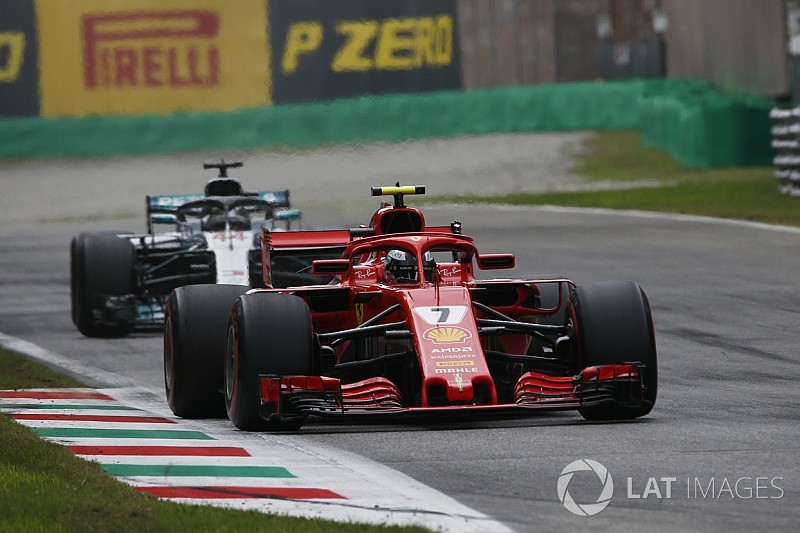 Kimi Raikkonen said his defeat to Lewis Hamilton in Formula 1's Italian Grand Prix was “hard to take” because his Ferrari had the pace to win.

Raikkonen led a Ferrari 1-2 with teammate Sebastian Vettel in qualifying, but was left defending his lead from Mercedes driver Hamilton after Vettel spun while battling the Briton on the opening lap.

Mercedes crucially left Hamilton's sole stop eight laps later than Ferrari and Raikkonen, and then kept Valtteri Bottas out longer to impede the race leader and allow Hamilton to close in.

Raikkonen's soft-compound tyres dropped off towards the end, and he was passed by Hamilton with eight laps to go.

“For sure I think we had the speed [to win] but then the tyre went and there was nothing left in the end on the left rear,” Raikkonen said after the race. “It is hard to take.

“It was a losing battle since that point but I tried, but it was impossible in the end unfortunately.

“It is far from ideal but this is what we have got today, we did our maximum.”

Raikkonen admitted the laps spent behind Bottas contributed to his tyres going off at the end of the race.

“[It] didn’t help to be behind the other cars for some laps, and it wasn't really like you can save an awful lot of tyres, you are not in a position to start saving and taking it easy - well you can, but you let him [Hamilton] past,” he said.

“There was no moment we just could take it easy and relax, it wasn't really a case of 'let’s just go around and save the tyres for the last moment', we had to go, and unfortunately it didn’t pay off today.”

Raikkonen went on to finish nine seconds behind Hamilton, having had to drastically decrease his pace and nurse his tyres to the chequered flag.

“Luckily it lasted until the end of the race,” he said. “Not ideal but not much we can do.

“It wasn’t a disaster but for sure not what I want or what we want.”